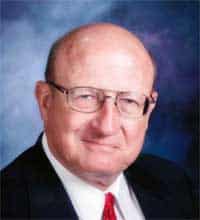 Jim, age 69, passed away the morning of May 18, at his home in South Jordan, UT attended by his family. After a diagnosis of cranial glioblastoma, Jim spent his final months with his wife, Jan, their six daughters and 16 grandchildren. He cherished them all.

He was born Feb. 18, 1953 in Logan, UT, to Nina Maughan and Stanley Peter Marsh, the second of five children. He grew up in Los Alamos, NM, graduating from LA High School in 1971 then on to Utah State to complete his BA degree in Music Education while running hurdles for the university, lettering every year, and his Masters in Secondary Education. Jim was selected two years in a row as the student athlete of the year at USU having the highest GPA of any athlete on campus. He spent two years serving a mission for the Church of Jesus Christ of Latter-day Saints in the Portland, OR Mission.

Jim was a lover of sweets, Louis  L’Amour, and afternoon rides on his scooter, checking in with the neighborhood or meeting up with friends.

Jim was a winner. He was first to the top of the rope in grade school, fastest hurdler and highest high jumper in high school, and the only guy who could have won the heart of the most beautiful girl at Utah State while driving a VW hatchback.

Jim Marsh was a Music Man. Before the turn of the century, he played in all the pit orchestras for Promised Valley Playhouse, and Salt Lake City’s entertainment venues. Although French horn was his instrument of choice, he learned to play all brass and woodwind instruments as he spent 15 years teaching band and music.

Jim began his career in North Summit School District in Coalville, UT, and in 1979 the Utah Music Educators Association selected Jim as the Rookie of the Year. While teaching at Eastmont Middle School in Jordan School District, he received a Teacher of the Year award. Helping students learn their instruments was a challenge topped only by getting them to play on the same page at the same time. His beloved Grandmother Lovisa would remind him on occasion “Keep those kids busy. If you don’t, they surely will keep YOU busy.” The strategies he learned in modifying student behavior served him well as he transitioned to Assistant Principal.

In 1991 he completed another graduate degree in School Administration and went on to serve as Assistant Principal at Eastmont, Oquirrh Hills, and South Jordan Middle Schools, as well as Jordan, Alta, and Riverton High Schools until retirement in 2015. Jim had a great respect for the students and sought opportunities to get them involved in sports, music, and arts in their schools. He also helped them recognize their responsibility to find a compromise as they worked through conflicts with one other. Often, he would pull out his guitar and calm the room until cooler heads prevailed.

Jim spent 30 years as a member of the Utah National Guard 23rd Army Band. He considered it an honor to play with such skilled musicians. He also played in the Army Band’s Brass Quintet and started a quartet that sang with the band. The band performed often throughout Utah and enjoyed several tours abroad. Jim recalls with great solemnity the honor of playing at Ramstein Air Force Base when flag- draped caskets came off the planes.

He is survived by his wife of 46 years, Jan Baugh Marsh, whom he loved and appreciated for her unfailing devotion, strength of character, and shining example. Their children who have been the light of his life: Jaci and Rodney Thornell of Herriman, UT, April and Travis Johnson of Vale, OR, Amber Marsh and Eric Woken of Meridian, ID, Chelsea and Nick Lopez of Seattle, WA, Adelin and Riley Dias of Hurricane, UT, and Ciera Keller of South Jordan, UT. The grandchildren: Maya, Jett, Tytan, Hawk Thornell; Riley, Diesel, Claire, Tucker Johnson, Lily Brownlee; Ethan, Brix Lopez; Rocco, Deion, Krush, Rhone Dias; and Tyson Keller. He is also survived by his brother, David, and his sisters Sally, JC, and Kate.

The family would like to thank members of the Founders Park 6th Ward, the Founders Park Stake, as well as all those in the Country Crossing neighborhood, family, friends and colleagues of many decades, and those at the Huntsman Cancer Institute – Dr. Joe Mendez, Heather, Paula, and other employees, Intermountain Homecare and Hospice – nurse Amber and CNA Brittney, and other employees, and the South Jordan Fire Department EMT’s. All of these amazing people lovingly cared for, served, prayed for, and lifted the spirits of Jim and his family.

For your information: Interment with military honors at 12:30 p.m., Monday, June 6, at the Logan City Cemetery.

In lieu of flowers, the family suggests making a donation to a charity of your choice.