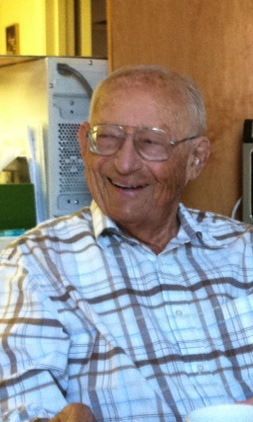 Just short of his 95th birthday, our adored father left his cares behind and joined our mother, his most beloved wife, Sally. They were married for 65 years and can now pick up where they left off just a few years ago.

Dad was born and raised in Cleveland, Ohio. He earned his BS from Case School of Applied Sciences and returned to Case for night school to earn his MS in Metallurgical Engineering. For two years he worked for Republic Steel Corp, then returned to Case to work in a research and development program.

In 1944, he was asked to come to Los Alamos, NM for a top-secret government program – “with no info given!” The program turned out to be the Manhattan Project. He became group leader of CMB-6 for the Los Alamos Scientific Laboratory (LASL, now LANL) and held that position for 29 years. He retired in 1981 after approximately 37 years with the Lab.

In 1963, he received a letter from President Kennedy authorizing the Atomic Energy Commission’s recommendation that he (Dad) be awarded the prestigious Ernest Orlando Lawrence Award. He was the first metallurgical engineer to receive that recognition. He was also a Fellow of the American Society for Metals (ASM). But maybe most importantly, he was greatly admired and respected at LASL, earning nicknames such as Sunny Jim and Gentleman Jim.

He retired to Tucson with Sally where they enjoyed many, many years together, traveled extensively and volunteered their time. They had season tickets to the opera, symphony and theatre.  Dad’s interests included music, tennis, golf (with TWO holes-in-one – the first at age 80!), hiking, and dancing with Sally. He loved to drive his old Buick, and hated computers!

He was incredibly smart, compassionate, supportive and engaged in whatever held his interest. He was slow to anger and quick to laugh. Dad was a very kind man who believed in treating everyone with respect and, to the end, had a marvelous, wicked, dry sense of humor.

He is survived by those he describes as two wonderful daughters “most of the time” – Janet Taub Buckland and husband David Buckland, and Judy Taub and partner Allison Newman.

Gentleman Jim has left the building. He will be forever missed.

In lieu of flowers, the family suggests memorial contributions be made to a favorite humanitarian, liberal, environmental, medical, or animal welfare charity.