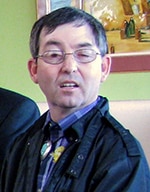 On the afternoon of June 11, 2018, the angels came to lead our brother, James Jim Patrick Borrego into paradise.

Jim was born on February 20, 1965 in Los Alamos, to Tony and Jessie Borrego. He was a lifelong resident of White Rock and the second of four sons. He graduated from Los Alamos High School in 1983 and later from ITT Tech in Albuquerque. He then began his career at LAHS in the electronics department and after 25 years, planned his retirement at the end of June, prior to him falling ill in the early spring.

Jim lived a quiet life dedicated to his job, rarely missing a day of work. His main focus in life was the time he spent with his family, especially with his mom and dad. He was an avid Steelers fan and had plenty of memorabilia in his home and he seemed to always be wearing a Steelers cap.

Every spring Jim was out preparing his garden both at his home and his parent’s home as well. He always looked forward to planting and caring for his garden especially his tomatoes. He had a “fixer upper” Jeep that was always a work in progress and a hobby he enjoyed along with his fishing trips.

Jim took pride in presenting his infamous brisket at any of the frequent barbecues his family enjoyed together, especially on the 4th of July. Holidays were seemingly coordinated by Jim. He gave everyone their item to bring to the Thanksgiving feast and stringent on the time dinner was to be served. Jim put up the Christmas lights, tree and all the trimmings, as well as rounding everyone up to make “Jessie’s Biscochitos.” There was always plenty of pizzas and of course his favorite, Dr. Pepper.

Despite his lifelong illness, Jim’s vocabulary never included “disabled.” He lived his life to the fullest, even if it were only an afternoon of watching the movies he loved most.

Though small in stature, he will leave a large void in the lives of those who loved him most. Rest in peace our brother.