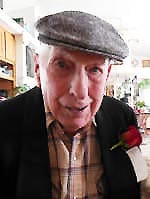 JAMES COULTER Sept. 28, 2018
James Coulter, passed on to his Heavenly home Sept. 28, 2018 at the age of 101.
Born the son of George and Mabel Coulter, he grew up the middle of seven children on a farm in southern Illinois during the Great Depression.
He had a happy childhood in a close-knit family, but following his graduation from High School James moved to Morton, IL to find work. He first worked in a canning factory and was invited to live with an Amish family (“New Amish”), the Aupperles, in exchange for doing chores on their farm; for the rest of his life he thought of them as a second family. After about a year they encouraged him to apply for the apprenticeship program at Caterpillar Tractor. He was accepted into their 4-year training school and learned the skills of a master machinist that he used throughout his career.
When WWII began, James enlisted in the Navy and was stationed at Navy Pier in Chicago where he taught aircraft mechanics. Later he was assigned to the Manz Corporation and helped with the creation of a manual for repairing SONAR equipment.
The war over, he was drawn west to Colorado. His skills as a machinist were in demand and he quickly found work in Colorado Springs. James was outgoing and made friends easily; among those friends were Sel and Ellen Hewitt, who played matchmaker, introducing him to Ina Campbell. He and Ina married about four months later, on Christmas Day of 1948.
In 1951 James and Ina moved to Los Alamos, NM with their two oldest children, Joan and Robert. Two more children, Elizabeth and Pam, were born in Los Alamos. James worked initially in the C-Shop of Los Alamos Scientific Laboratory and then the Main Shop, but in 1961 was assigned to the Health Research Lab. It was there that he found his calling.
He thrived on the challenge of working with scientists to design and build instruments they required for their work in flow cytometry, a science that was then in its infancy. In 1974 James retired from LANL, feeling the need for more independence, and spent the next 30 years continuing his work as an entrepreneur, with his business, Research Developments, operating out of a shop in the basement of his home. As the science of flow cytometry became more widespread and increasingly complex, he continued to meet new challenges as he built flow cells for as many as 16 universities as well as other public and private institutions.
He co-authored several articles on the subject of flow cytometry that were published in various scientific journals.
James and Ina loved Los Alamos and both were active in the community. Much of their family’s life was focused around the United Church, where they found a devout and welcoming Christian community. In the 50’s and 60’s the Couples Class was a great source of faith building, friendship and socialization. James served as a trustee for 30 years and remained active in all parts of the church’s life and service into his 90’s. He also enjoyed the friendships made as a member of the Los Alamos Chess Club and Toastmasters.
James and Ina both enjoyed travel, and summers invariably meant hitching up the trailer to set off on a road trip through National Parks and to connect with family and friends. They waited until the nest was empty to travel overseas, including trips to Israel, Scotland, Australia and New Zealand.
Often known for his argumentative side, those who knew James best were also aware of his generosity. He was the guy who would stop to help you change your flat tire or give you the shirt off his back. He lived out his faith in practical ways, giving of his time and nurturing friendships. There are many who will miss this kind and generous man.
James is predeceased by his wife of 68 years Ina, his parents and all six of his siblings. He is survived by his daughter Joan (Pedro) Oliver, son Robert (Gabriella) Coulter, daughter Elizabeth (Timothy) Johnson, daughter Pam Coulter, grandson Bill (Julie) Oliver, granddaughter Vanessa (Paul) Jarr, and seven great-grandchildren.
The family wants to extend our sincere thanks and gratitude to Cesar and Ana Maria Ojeda for their warm and loving care for the last two years of James’ life.
We also thank the United Church family, and especially Rev. David Elton, for their support and friendship over many years. Thanks, also, to the Los Alamos Visiting Nurse Service for their support in his final weeks.
Memorial Service will be held at 10 a.m., Saturday, Nov. 3, at the United Church in Los Alamos.
Menu
Los Alamos
86°
Sunny
5:48am8:23pm MDT
Feels like: 86°F
Wind: 14mph SSE
Humidity: 20%
Pressure: 29.92"Hg
UV index: 10
WedThuFri
91/64°F
90/63°F
88/64°F
Weather forecast Los Alamos, New Mexico ▸