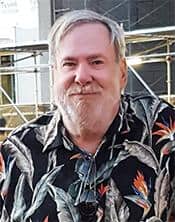 Henry Charles “Chip” Christians III, aged 66, formerly of Los Alamos, NM passed away peacefully at home Monday evening November 4, 2019 with his wife Carolyn at his side after a five-month battle with cancer.

He was born April 17, 1953 in Wheaton, IL to Joan Carolyn Beutel and Henry Charles Christians II. He grew up in Los Altos, CA and Hinsdale, IL. He spent several years training polo ponies. He was married to his first wife Sharon Thompson until her death in 2009. Two children blessed their lives; a daughter Dana and a son Travis. Favorite pastimes included fishing and golfing at Dairymens Country Club in Boulder Junction, WI.

His career focus was computer programming for large companies all over the world. He was later employed in sales at Saturn of Santa Fe, Garcia Hyundai, and Touchstone Galleries in Santa Fe, NM before retiring in 2016.

While he was employed at Saturn, he fell in love with a clown! On May 25, 2011 he married Carolyn Ramsey aka “Snaffles the Clown” at the Fuller Lodge Rose Garden in Los Alamos, NM and enjoyed eight years of adventure and joy as “Goofballs 4-Ever”; highlighted with a move to their retirement home in Prescott, Arizona in 2016. Chip became an avid golfer at the Prescott Lakes Golf and Country Club, taking advantage of the year-round mild climate to practice his swing. He and Carolyn also attended Clown Camp at La Crosse, WI and a clown convention in Las Vegas, NV. One of his favorite things were the road trips that he and Carolyn took throughout the US, visiting any and all places Disney.

He is survived by his beloved wife Carolyn of Prescott, AZ, his daughter Dana Ostrom (Ben) of Minneapolis, MN, his son Travis Christians of Alcalde, NM, his brother Danny Christians (Donna) of Sandpoint, ID, and Kim Peterson (Dennis) of Carlsbad, CA. He is also survived by his stepson Justin Ramsey (Shandi Lopez and their daughters Angel, Tiana, and AnaLisa) of Los Alamos, NM. He was preceded in death by his first wife Sharon, and his parents.

A memorial service is planned with family members over the Christmas holidays in Prescott and for friends in Los Alamos and Santa Fe at a later date. Cremation has been entrusted to David’s Desert Chapel Funeral Home of Wickenburg, AZ. Memorial donations may be sent in Chip’s memory to Santa Maria El Mirador (where his son Travis lives in a group home), 10 A Van Nu Po, Santa Fe, NM, 87508; any cancer research facility/organization, or a charity of choice.

Chip and Carolyn had eight short, albeit absolutely wonderful, years together. Both had expressed that they were the happiest they had ever been in life and it showed. He is most remembered for his kindness, generosity, his fullness of love and enjoyment of life. Cancer took him, but it didn’t take his ability to laugh and share final pieces of wisdom, love and gratitude with his family and friends that loved him dearly. Chip will be greatly missed by all who knew him. But he will also be remembered for the lessons, the guidance, the support, and most importantly the love and sunshine he spread to this world. Thank you Chip for being a part of our lives, and for letting us be a part of yours.