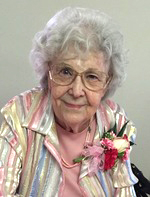 Helen M. Lederer, 91, passed into the Grace of Our Lord and Savior Jesus Christ, Monday morning, January 30, 2017, at her home in Rio Rancho, NM, surrounded by her children, grandchildren and loved ones.

From the time Helen was a young girl in Marysville, Kansas, William and Lucy Corning instilled in her, and in her sisters and brother, that the truest riches in life are those we find in one another. She was raised in the Lutheran Church, and this foundation of Faith would shape the rest of life, both personally and professionally.

One night at a dance she almost missed, she saw a handsome gentleman enter the room in his uniform. Helen had been courted, and proposed to many times from men in uniforms, but there was something special about this young man with dark wavy hair and gentle blue eyes. He walked toward her and asked her girlfriend to dance, and Helen felt some disappointment, until her friend returned to her seat and said, “Well, that was a waste of time.” She told Helen that all he talked about was the girl sitting next to her! Did Helen have a date? Was she engaged? Where did she live? So Helen’s hopes returned, and he finally asked her to dance, and whispered something French into her ear, so she patted him on the back and said, “Hey fella, I’ll have you know I studied French in high school, and you better watch what you say to me!” He apologized like a gentleman, even though Helen didn’t know a single word of French, she just wanted to see what kind of guy she was dancing with…..and the rest of that dance is a romance for history.

The Lederer family grew, and settled in Tulsa, Oklahoma. Helen and the love of her life, had just bought a home next door to Harold’s sister, Joanne and husband Bill. The neighborhood was as lovely as the people who lived there, many of whom had come home safe from the War; and like Harold, after flying 50 missions over Normandy, France, and Germany. These survivors felt both charmed and bittersweet, being the blessed of so many to make it back home. When Harold told Helen he had an offer to work at Los Alamos National Laboratory, she didn’t know what to say, a moment she would readily admit did not happen often. She thought about their future, and Harold came back from the interview with a film of the government housing in Los Alamos, Helen hesitated for more than a moment this time, but her Faith and belief in her family came first; she packed up the house, said too many goodbyes, and cried all the way to Los Alamos. She had the hopes of her husband in her heart, two little girls in the car, and their beagle puppy, Tippy, on the back seat floor. Fortunately, the beauty of the New Mexico mountains made the housing much more tolerable, and she felt that deep and unwavering Faith was alive in this little secret community, and she signed up for Sunday School teaching.

In 1963 she applied her professional background to further her service to the congregation, working as church secretary for over 27 years. Daughters, LuAnn and Leesa were both confirmed and married at Bethlehem Lutheran, and settle in the greater Albuquerque area. When Helen and Harold retired after 30 years in Los Alamos, they moved to Rio Rancho to be closer to their daughters, sons-in-law, and extended family. The role of grandparents quickly enriched their lives, spending more quality time with LuAnn’s girls, Nicole Christine and Carleigh Jean. Helen and Harold became members of Faith Lutheran Church in Albuquerque, fully enjoying their new home.