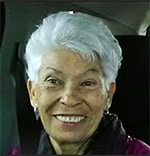 Helen Aragon Valencia of Espanola passed away surrounded by her family on the morning of August 27, 2018 following a strong seven months living with Acute Myeloid Leukemia. She was 77 years old.

Born in Corral De Piedra, Española to Solomon and Anita Aragon on March 20, 1941 she was a integral and beloved part of her family and community.

She was a devoted Catholic and lived a life close to God. She kept her faith in the Lord vigilantly and remained deeply rooted in her connection to her parentage. She was a member of The Sacred Heart Altar Society in Espanola, a sanctity she held close to her heart.

She built a gratifying career working in Los Alamos with Medical Associates of Northern New Mexico for 17 years and in White Rock with Dr. Margaret McCreary for 20 years.

Helen was the beating heart of her family. She was selfless in her love of them, and brought them faith, honor, laughter, and unity. She was revered by those who knew her and will be often remembered and missed.

Rosary will be held on Wednesday night at 7pm on August 29th, 2018 at Sacred Heart of Jesus Parish in Espanola, with services following on Thursday morning at 10 am on August 30th, 2018. Pallbearers will be Dennis Valencia, Matthew Valencia, Daniel Valencia, Ralph Vigil Jr., Larry Arellano, and Jaime Marquez.

The family would like to thank UNM Comprehensive Cancer Center doctors, caregivers, and staff for providing us with compassionate and loving care.

Rivera Family Funerals and Cremations has been entrusted with Helen Valencia’s care.