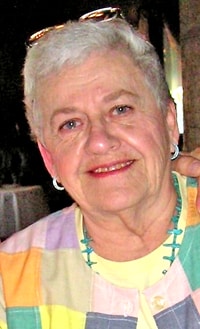 Gervaise “Geri” Guerette, 88, a resident of Winthrop, Maine, and formerly of Los Alamos, New Mexico, passed away peacefully, surrounded by family, on May 19, 2022.

Geri was born on May 10, 1934 in Lambton, Canada, a small rural town in Quebec. She was the eighth child of Wilfred and Rose-Anna Theberge. Shortly after Geri’s birth, Rose-Anna died. Knowing that Geri needed a full-time mother, Wilfred made the difficult decision to give Geri up for adoption to distant relatives, Lena and Willie Provencher of Lewiston, Maine.

Every Sunday as a child, Geri loved going to Old Orchard Beach with her family. She was also fond of their trips to Canada to visit relatives.

Geri attended primary school at Mount Merici in Waterville, Maine and Sts. Peter and Paul Parish in Lewiston, Maine. She found a passion for music – excelling at piano and voice. At the age of 14, she spent Saturday mornings singing on her own live radio show in Lewiston, accompanied on piano by Vita Caron, her lifelong friend.

Her high school years were spent at St. Joseph’s Academy in Portland, Maine. In 1953, she graduated from Tufts University in Medford, MA where she studied dental hygiene. While at Tufts, she enjoyed attending fraternity parties, formal dances and Red Sox games.

The summer after college, she met the love of her life, Raymond Guerette, on a blind date. The following summer they were married and spent their honeymoon moving to Albuquerque, NM, where Ray finished his university studies and Geri became the first licensed dental hygienist in the state. Daughters, Deborah and Michelle, were born before the family moved back to Maine where Ray completed his dental school prerequisites. It was there that Raymond Jr. was born.

After Ray graduated from dental school at the University of Missouri, the family settled in Los Alamos, NM. Geri continued her career for many years working alongside Ray in their dental practice. In addition to being a devoted wife, Geri was a devoted mother. She was very creative and an excellent seamstress. Geri was also very involved in the Los Alamos community. One of her most rewarding accomplishments was her volunteer work with Parents in Action; an organization dedicated to preventing drug abuse in communities statewide.

After retirement, Geri and Ray returned to Maine and settled in the Winthrop area. They took frequent trips to Canada where Geri made many fond memories reconnecting with her biological siblings.

Geri was predeceased by her husband, Raymond, her four biological sisters, Jacqueline, Lorraine, Jeanne d’Arc, and Gaetane, and her two biological brothers, Rosaire and Hercules.

Geri’s funeral mass will be celebrated in St. Francis Xavier Church, 130 SR-133 Winthrop, Maine, on June 20, 2022 at 1:00PM. Following mass will be a burial for Geri and her husband, Ray at Glenside Cemetery, Turkey Lane, Winthrop. A private celebration of life for relatives and close friends of Geri’s will follow at the American Legion Post 40, 40 Bowdoin Street Winthrop, from 3:30pm-5:30pm.

In lieu of flowers, donations may be made in Geri’s memory to: St. Jude’s Children’s Research Hospital (http://giftfunds.stjude.org/Geri_Guerette), or Winthrop EMS Fund “in memory of Geri Guerette”, c/o Town of Winthrop, 17 Highland Avenue, Winthrop, ME 04364.

Arrangements are in the care of Roberts Funeral Home, 62 Bowdoin Street, Winthrop where memories, condolences, photos and videos may be shared with the family on the obituary page at our website www.khrfuneralhomes.com.