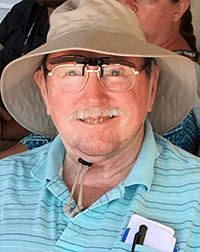 George Francis Hurley, 82, passed away peacefully at the Senior Care Center in St. Marys, GA with his wife Peggy by his side Dec. 27, 2022.

George was born Nov. 15, 1940 in Boston, Massachusetts to Cornelius and Georgia Hurley. George graduated from MIT in 1964 with a Doctoral degree in Materials Science. He worked for Pratt & Whitney in Connecticut, followed by Tyco Industries in Waltham, Massachusetts.

The family moved to Los Alamos in 1975, where George worked at Los Alamos National Laboratory until retirement in 2001. He worked various positions there, last being the Stockpile Stewardship Program. It was said of George, “Thanks to George’s keen technical judgement and careful planning operations with nuclear weapons that were conducted with a greater degree of confidence and understanding than at any time in our nation’s history.” George’s pride in academic achievements and the camaraderie and memories cherished between George and former classmates and colleagues will not be forgotten. He was an accomplished sailor, loved camping, hiking, cross country skiing, travelling and woodworking.

In addition to his parents, he was preceded in death by a sister, Judy, brother in laws, Johnnie, John, Anthony, Richard, and Willie and sister in laws, Jessie and Donelda.

A memorial service will be held at Our Lady Star of the Sea Catholic Church at 11 a.m. Saturday, Jan. 28.

Allison Memorial Chapel is in charge of arrangements.