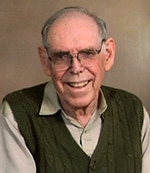 In 1937, his family moved to Davis, CA, where he graduated from Davis High School in 1950. He then attended the California Institute of Technology where his friends affectionately called him “Cookie”. As a junior he came in 4th place for the national “Putnam” competition. He graduated in 1954. He went to UC Berkeley for his PhD in Physics which he completed in 1956. He did a year of post-doctoral study at Columbia University in New York City. In the summer of 1957, he went to work at the Los Alamos Scientific Laboratory. In 1961-62, he worked at UC San Diego Scripps Institute. In 1964-65, he took a sabbatical leave at Kings College in London, England. After his return to Los Alamos, he and his family moved to Bellport, NY to work at the Brookhaven National Laboratory. In 1971-72, he took a sabbatical to Cornell University. In 1975, he moved back to work at the Los Alamos Scientific Laboratory. In 1976-77, he had the opportunity to visit the Center for Nuclear Studies, outside Paris, France, then returned back to Los Alamos. In 1982-83, he took another sabbatical, half the time in France and half the time at Princeton University. At this time he was made Laboratory Fellow, a promotion for distinguished research.

During his career, he published more that 100 technical papers and three books. He was an expert in the area of Pade Approximates and its application to Ising Models. He retired in 1995 from Los Alamos Laboratory.

In his spare time George loved traveling and music. He visited all the continents except Antarctica. Music was a constant in his life. In high school and college, he played the trombone. Throughout his life he sang in the church choir. He frequently attended the opera and other musical concerts. In his final months music was his great solace. A Memorial Service will be held, August 18, 2018 at 1:30 p.m. at the United Church of Los Alamos, 2525 Canyon Rd, Los Alamos, NM 87544.

In Lieu of flowers, memorial donations may be given to the Lewy Body Dementia Association, www.lbda.org/donate, to the United Church of Los Alamos, or to the Salvation Army. The family of George Allen Baker has entrusted the care of their loved one to the DeVargas Funeral Home & Crematory of the Española Valley. www.devargasfuneral.com / 505.747.7477.