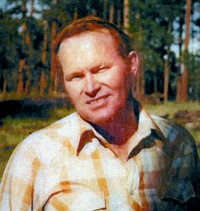 Frank’s mother passed away in 1942 when he was 6 years old. His father went to work as a carpenter at the Manhattan project (later to become Los Alamos). He lived with his Uncle Frank Williams and Aunt Lula Scroggins – brother and sister of his father’s in Selfs, TX.

At the age of 10, in 1946, he moved to Los Alamos, NM with his brother Ray and they were reunited with their father. It was at this time he received the nickname Red, because of his red hair. He met many lifelong friends at school.

In 1955 he married his first wife, Betty Lamb, and lived in Las Vegas, NV for a time before returning home to Los Alamos. Red and Betty had two children – Jimmy Ray and Debra Jo. The marriage didn’t last, and they were divorced.

In 1980 he married the love of his life, Janell Clare Daggett and they enjoyed almost 42 years together. They both worked for the same subcontractor to LANL; Zia Co., Pan Am, Johnson Controls. Red worked his way up from Carpenter, Carpenter Foreman to Carpenter General Foreman. After being plagued by some health problems, Red had to retire. He tried to keep an upbeat attitude and took life as it came. He said he saved the best wife for last.

Red has joined two of his oldest and dearest friends: Skip Taylor and Corky Thorn.

At Red’s request, his body will be cremated, and a small ceremony of family members will be in attendance. In lieu of flowers, please make a donation to The American Red Cross, who helped during our fire evacuations, or to a charity of your choosing.