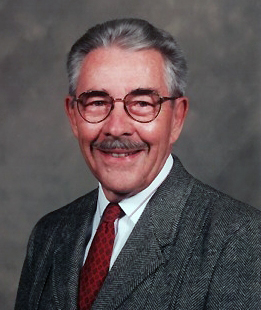 He was born on March 21, 1914 in Wheaton, Minnesota. He married Joyce Krenz, also of rural Minnesota on January 6, 1942. They celebrated 71 years of married this past January.

They spent four years at the Bureau of Mines in Pittsburgh, followed by work in Indianhead, Maryland and Washington, D. C. In 1948 they came to Los Alamos. Gene retired from the Lab in 1980.

Gene enjoyed and deeply cared for his work in Los Alamos. Those were exciting years. He was a good father and fine husband. His family is proud of his accomplishments. Gene is survived by his wife, Joyce and by five children: Susan Roybal, Peter and wife Kathy, James, wife Jacque, Barbara, husband Keith Van Pelt and Robert, his brother Bruce, 12 grandchildren and 9 great grandchildren.

Gene was a founder and member of the Bethlehem Lutheran Church. He served there in many ways. He was the instrumental in the building of Sombrillo Care Center.

Thank you to all who have made his years so good.

A memorial service will be held at Bethlehem Lutheran Church at 3 p.m. on Saturday, March 23.

In lieu of flowers, contributions may be made in Gene’s name to Bethlehem Lutheran Church, 2390 North Road, Los Alamos, NM 87544.