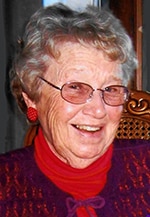 Esther was born on November 18, 1926 to Martin and Alma Kittelson in Lac Qui Parle County on a farm near Appleton, Minnesota. She was the 5th of eight siblings. Esther attended Moorhead State College and received her Bachelor’s degree in Recreation. Esther also received a teaching degree at the University of Minnesota. She taught school in Minnesota (even for some time in a one room schoolhouse) before moving to southern California.

She was a church secretary there before meeting and marrying Keith H. E. Larson. They were married on November 5, 1955 at Mount Olive Lutheran Church in Santa Monica, California. Keith and Esther had three children while living in Santa Monica and La Habra. In 1968, the family moved to San Jose, CA, where Keith took a job with IBM. Over the years, IBM transferred Keith and Esther to Tucson, AZ and then to Rochester, MN. While in Tucson, Esther became a docent at the Tucson Museum of Art, one of her many interests.

The return to Rochester allowed Esther the opportunity to visit family members still living in Minnesota more frequently. In 2004, Esther moved to Los Alamos, NM to be close to her youngest son Sheldon, and his family. Esther enjoyed reading, gardening and spending time with her family and especially her grandchildren. She was blessed to enjoy a long life filled with God’s grace.

She is survived by her sister Valborg Johnson of Oak Park Heights, Minnesota; sister Olive Dornfeld of Plymouth, Minnesota; her son Kent Larson of Los Alamos, NM; her daughter Carolyn Brenner and husband Ralph of Eagle, ID, and her son Sheldon Larson, and wife Lisa of Los Alamos, NM. Esther is survived by six grandchildren and five great grandchildren.

A memorial service will be held on July 10 at 10:30 am at Aspen Ridge Lodge in Los Alamos, NM. The family of Esther Caroline (Kittelson) Larson has entrusted their loved one to DeVargas Funeral Home & Crematory of the Española Valley. 505.747.7477, www.devargasfuneral.com.