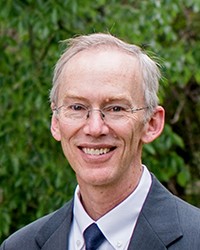 While growing up, Eric was involved with the family’s horses and the Junior Sheriff’s Posse. This involved various camping trips, many days trail riding, and performing in exhibition events at rodeos and parades, as well as regular early morning bike trips between mesas to care for the horses. In high school he was heavily involved in band and theater. He was in the all-state band all four years of high school.

After Eric graduated from Los Alamos High School in 1977, he went on to study Electrical Engineering at the University of New Mexico where he earned a Bachelor’s degree. During his undergraduate studies, Eric received a copy of “A Course in Miracles” from his dad. The teachings of love and forgiveness taught in the Course profoundly impacted his view on life and the way he interacted with everyone he encountered.

After graduating from UNM, Eric’s first job was at Johns Hopkins Applied Physics Lab. During this time he simultaneously earned a Master’s Degree from Johns Hopkins University. At APL he worked in the Space Department for a short time where he worked on special purpose GPS receivers and, to a lesser extent, on spacecraft. He then switched to the Fleet Systems Group and worked on submarine communications. During the later part of his time at APL, Eric was looking into additional career field options and thought Cellular Communications looked interesting. While the underlying concept was not new in the early ’90s, he was aware that the technology was about to begin rapid development. Eric searched for a class on cellular communication and found none available. Therefore, in typical Eric fashion, he purchased several books, taught himself, and then offered to teach the class he had wished to take. His proposal was accepted, so Eric developed a curriculum and taught a night class on cellular communication at APL for 2 years.

In 1988, Eric met Kalynne Davis in Silver Spring, Maryland. It was a reasonably short courtship, but why waste time when the ideal choice is already obvious? Eric and Kalynne married in 1989 and went on to have two happy children, Bryan Zachary Holm and Jacob Alexander Holm.

In 1997 Eric and Kalynne moved the family to Monument, Colorado. In Colorado, Eric worked at several places, including RT Logic and AMERGINT Technologies, where he worked in satellite communication  and was able to make significant contributions to the field.

Living in Colorado offered a plethora of exciting adventures for Eric and his family. Camping trips all along the Front Range, canoeing in Lake Dillon, and road trips nearly every summer. During all of these adventures Eric spent as much time as he could doing two things: passing on his not-insignificant knowledge to his wife and two young boys, and actively loving his family and his fellow man. The former was always remembered and valued by his family, while the latter cemented bonds between the four that would remain unbreakable even beyond the confines of Earthly existence.

In 2018, Eric retired and spent much of his newly available time doing more hiking and biking. Eric always enjoyed being outside and staying active. He loved hiking and exploring the mountains and trails around his home. He loved the outdoors, hiking one mountain after another.

He is survived by his wife, Kalynne Holm, son, Bryan Holm (Natalia), brother, Chris Holm (Lesleigh), and sister, Heidi Bjorklund (Mark) as well as many nieces and nephews.

A “Celebration of Life & Memorial Service” will be held at The Secret Window in Monument, Colorado at 11 a.m. Dec. 12. Eric felt strongly about doing what we can to take care of each other. If you would like to make a donation in his name, donations can be made to Tri-Lakes Cares, an organization Eric regularly supported.