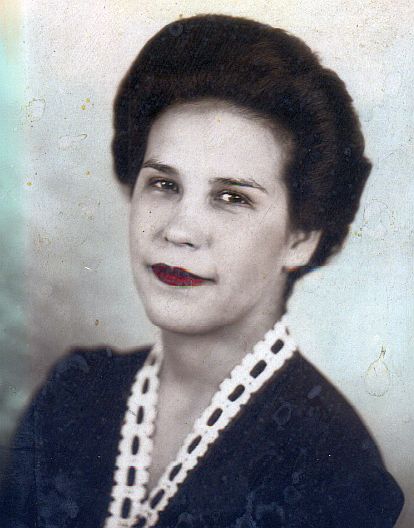 She was known to her family and friends as “Eddie” and to her grandchildren as “Honey.”

She graduated from Santa Cruz High School in 1940. During the early war years she worked at the Boeing aircraft factory in Seattle, Wash.

She returned to New Mexico and worked at Los Alamos Scientific Laboratory for several years beginning in January 1944, first as a lab technician and then as a supervisor.

She met James Andrew Bridge in Los Alamos and they married Nov. 18, 1946. Except for a brief period when the family moved to Albuquerque while Jim finished his degree, Eddie made Los Alamos her home.

She and Jim raised five boys and built a house on Barranca Mesa with bricks from the original tech area near Ashley Pond.

She loved her family and her violets, and learned to “appreciate” Alfa Romeos. Honey’s grandchildren fondly remember making green Jell-O with her (any color Jell-O was green to them) and could always count on the cookie jar being full.

She was preceded in death by her husband, James Andrew, and sons James Edward and John William. She is survived by her son Arthur Louis (Meredith “Suki” Coonley) of Los Alamos, son Richard Allan (Sheridan Brown) of Los Alamos, son Jo David (Sarah Petersen) of Tijeras, and grandchildren Alexander and Anna Sofia Bridge of Centennial, Colo.

She is also survived by sisters Faye Martinez of Fairview, N.M.; Catherine Noble and Barbara Ortega, of Las Vegas, N.M.; and numerous nieces and nephews,

A rosary will be held Wednesday, Oct. 17, from 7-8 p.m. at the DeVargas Funeral Home in Espanola.

The rosary will be preceded by a private viewing from 5:30-6 p.m. and a public viewing from 6-7 p.m. Funeral mass will be held Thursday, Oct. 18, at 10 a.m. at the Immaculate Heart of Mary Catholic Church in Los Alamos. Burial will be at Guaje Pines in Los Alamos.

The family would like to thank the staff of Sombrillo for their care of Eddie over the past few years. In lieu of flowers, the family suggests friends make a donation to Sombrillo Nursing and Rehabilitation Center.