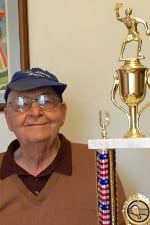 Edgar B. Stein finished his last table tennis match on July 6, 2018 in Weatherford, TX where he was close to his youngest daughter, Karen, and her husband Rick Brown. He was 95. He is also survived by his son, Erik, and wife Michelle, of Gaithersburg, Maryland, five grandchildren and seven great grandchildren.

Dad was born in Murphysboro, IL on September 12, 1922 and grew up in Champaign-Urbana. In 7th grade, he started playing the tuba, later the sousaphone in high school where he earned a scholarship to Interlochen Music Camp.  In September 1940, Dad enrolled at the University of Illinois and his sousaphone skills earned him a spot on the UofI marching band. While pumping gas for $.25 a day, a friend came by the station and told him Pearl Harbor had just been bombed. Though at the time he didn’t even know where Pearl Harbor was, on June 22, 1943, he joined the army and was later assigned to duty with The Manhattan Project in Oak Ridge, TN.

While in the Army, Dad met the love of his life, Jeanne Kersten, on a blind date arranged by his best friend Dan Porter. Convinced she was the one, Dad drove the hundreds of miles on weekends to see her in Jacksonville, IL where she was attending college. Dad used to tell the story about how he smoked cigars and sang at the top of his lungs to stay awake on the long drive. But not sure long drives to see Jeanne were romantically sufficient, he taught himself the entire first movement of Moonlight Sonata on the piano to impress Jeanne. It worked! Jeanne and Edgar were married June 3, 1944 in Mattoon, IL, and Dan Porter was his best man! Mission accomplished, he never learned another piano piece. But I will never forget hearing him play that on the upright in the living room.

After Dad was discharged from the Army in 1943 due to a training injury, he re-enrolled at the University of Illinois, and in spite of his musical talents, graduated with a degree in mechanical engineering. Dad’s first job after college was in Whiting, Indiana with Standard Oil of Indiana.  From 1948-1958, he worked in Los Alamos 2 different times, Sandia Lab in Albuquerque, Glenn R. Martin in Baltimore, MD, and Motorola Corp. in Phoenix, AZ before returning to Los Alamos and settling down for good in 1958.

Dad worked a variety of positions at Los Alamos National Lab, from weapons design to, as he called it, ‘glad-handing’ as the group leader of PUB3 which liaised with the dignitaries and VIPs working with the lab. Always curious, Dad once wondered how well a bunch of decommissioned bombs would roll down the hall to their final resting place. Turned out they were too heavy to roll and just dented the linoleum. (Who knew linoleum could be dented?) He was privileged to follow in the footsteps of giants before him and was at Trinity Site for the first test of a plutonium device

In recent years, Dad was invited to attend a regular luncheon of the ‘bomb makers’ – retired scientists and engineers who lived the ‘Making of the Atomic Bomb’. I recently found Dad’s Manhattan Project patch. We are proud of his contribution.

When Los Alamos opened in 1959, an intrepid group calling themselves the ‘original nail-benders’ began building homes on the first tract of private land. Dad was a founding member. I don’t know if there are any nail benders still around, but Dad mentioned you often when retelling the story of building the house I grew up in. We moved in to our new home in November 1961, and it was in this house he cared for Jeanne until her death in 2015. Sadly, that was preceded by the death from cancer of his oldest daughter, Karla, a week earlier. He felt the universe kind of unfair after that.

Many in Los Alamos know Dad for the table tennis, aka ping pong, club he and Herman Owens founded in 1970 that still plays today at the Los Alamos Senior Centre. Dad started playing on an improvised table his dad built in their basement in 1934. He won his first tournament in 1938. Dad won, as he put it, the best and biggest of his career, the Over-75 US National Championship in 1998. He continued playing and winning for years right into the Senior Olympics until he had to stop playing in 2014. Those eight decades of trophies and medals graced our house for many years.

I remember a young buck once thought he could give Dad a run for his money and offered to ‘warm up’ Dad before a tournament. When they returned, young buck’s dejected face was explained by Dad’s comment “Not bad for a near-sighted old man with heart surgery and two artificial hips, eh sonny?” Dad was not exaggerating.

During the era of ‘Ping Pong’ diplomacy, Dad was asked, though declined, to be an umpire and accompany the US Table Tennis Team to China. He never was much for international travel. Or camping. Told me once his idea of roughing it was a hotel with black and white television.

In an earlier century, Dad was also the head (ok, only) mechanic of Bob’s Shop, named for his friend and partner Bob Krohn. There was a time when, if you needed a transmission overhauled in Los Alamos, Dad was the go-to man. There was always someone in the garage on the weekend seeking advice, repairs or maybe camaraderie at Bob’s Shop. That spirit lives on today in Walt Wright, Dad’s good friend, neighbor, and welcomed visitor of Bob’s Shop.

Others will remember Dad as a contributor to the community. He persuaded the County to put in a sidewalk from the bottom of North Mesa to Cumbres Junior High School. Thousands have benefitted from this, including one of my sisters and me. Dad was also a long-time driver for the Senior Center and suggested many improvements like maps for the drivers and an exchange table for reusable items. He was himself a driver for many years, delivering meals to people and people to appointments. He wanted to help, and he drove as long as he believed it was safe for him to do so. Would you believe he even renewed his driver’s license this past January?

This tournament is over, Dad. You played well. You are missed.