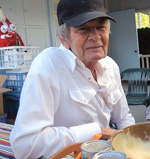 Eddie was born January 7, 1936, in Altus, Oklahoma, to Edwin Harrison and Verna Van Cleave Harrison. Verna passed away shortly after Eddie’s birth, after which Edwin moved to Gallup, NM.

He married Polly Gonzales of Gallup on Dec. 9, 1941. The family moved to Los Alamos in the spring of 1945 during the final months of the Manhattan Project.

As a teenager Eddie competed in local rodeos, where he rode bucking broncos. He graduated from Los Alamos High School in 1953, after which he began working at the Zia Company (later Johnson Controls), first as a machinist and later as a crafts coordinator. He retired from Johnson Controls in the late 1990s.

Eddie’s true passion was his music. He learned to play guitar by ear at an early age and joined his first country-and-western band, The Westerners, in the mid 1950s. He went on to write and perform music with several other country groups over the years, playing venues throughout New Mexico. His band The Silver Strings issued a two-song record in the late 1970s featuring the original tracks “Home Cooking” and “Making Love With You.”

In the 1980s, he often performed as a duo with former Silver Strings guitarist Chuck Owens. He later went on to play with the Whiskey River Band and Doc Gonzales and the Orange Blossom Express, continuing to perform at Tiny’s in Santa Fe well into the 2000s.

Eddie was an avid bird lover, and kept an African Grey Parrot named Joppa for over 20 years. He also had smaller parrots Stuff, Testy, and Rosebud.

He maintained several strong relationships throughout his life, including with dear friend Marie Harrison, the mother of his children; dear friend Patt Burch; Edna and Richard Martin; and Bill Hutchinson.

There will be a celebration of Eddie’s life on October 18, 2015, from 1 to 3 p.m. at Urban Park in Los Alamos. Guests are encouraged to bring acoustic guitars and other similar (non- amplified) instruments to celebrate his music, as well as a favorite dish.