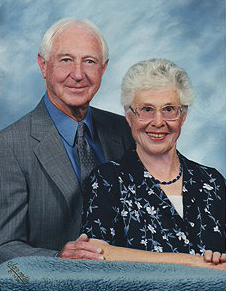 Earl A. Meyer, 90, passed away in his bed in the early morning of December 31st, 2014 in his home in Los Alamos, New Mexico. He is greatly missed.

We will remember this quietly impressive, deeply honorable and kind man. He was happiest being with his wife and family, solving scientific problems, fishing on nearby lakes, and listening to big band music, especially with the Farish family, close friends. His children will remember how he patiently encouraged us on our schoolwork, athletics, and how, remarkably, in his late forties, even joined us in Tae Kwon Do, at our request.

We are grateful that we cannot remember him losing his temper nor raising his voice to us, even as four rambunctious teenagers. We saw that he respected his wife, her career and artwork and gave his all to prolonging her life through ill health, in her later years. Earl didn’t talk much about himself nor demand to be the center of attention; it took his eldest son pushing for a biography to learn of Earl’s past, when Earl was in his eighties.

Earl was born on August 12, 1924 to Mamie (Boll) and Mathew M. Meyer in Chilton, Wisconsin. He started grade school early in Chilton, was 13 entering high school and 16, graduating from it. He immediately started at the University of Wisconsin in Madison, quickly realizing that physics was his interest. He left as a sophomore to enter the Army Air Corp in 1943, receiving his officer commission, before age 21, while training at Yale. Earl spent the war supervising technical radar in South East England.

After the war, he returned to the University of Wisconsin to receive his MS in physics and went to work for 13 years on accelerator technology in a research laboratory. While at the University, he met and married Roselyn Zukoski, who was receiving her MA in Art and Education. Earl brought Roselyn and their four children from Wisconsin to Los Alamos in 1967 when he was hired to build the injector end of the accelerator at Meson Facility. He continued to work after his retirement to almost age 80 and was consulted by other national labs for his expertise on the materials needed in the high vacuum, high temperature environment of injector accelerators.

A Rosary is scheduled for Friday, January 30th at 7 p.m. A Memorial Mass is to be held on Saturday, January 31st, at 10 a.m., and immediately followed by a reception at the McLaughlin Parish Hall, all of these at the Immaculate Heart of Mary Catholic Church in Los Alamos. There will be a cremains internment on Monday, February 2nd, at 10:30 a.m. at the Santa Fe National Cemetery for Veterans.
In lieu of flowers or gifts, if friends wish, memorial contributions may be made in Earl’s name to the Immaculate Heart of Mary Catholic Church (505-662-6193).