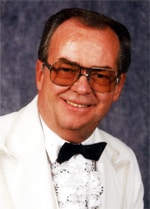 Dwight Hall Ray, 84, passed away April 19, 2018 as a result of complications from heart surgery in Phoenix, AZ.

After graduating from high school, he went to work at Servel, Inc. Then he joined the Navy and served aboard the USS Midway Aircraft carrier. After being honorably discharged he enrolled at Lain Technical Institute and graduated with an AS Degree in Tool and Gage Design.

Next he went to work for Firestone Industrial Products in Indiana and left for a better position at John Deere Tractor and Research and Engineering center, in Waterloo, Iowa.

In June of 1959 he was recruited by Los Alamos National Laboratory and went to work at PHERMEX and later became Supervisor of the Drafting Section. In 1961 he attended Engineering classes at the University in Albuquerque part time. He retired from Los Alamos National Laboratory in 1991 after 32  years of service but he continued to work for PLUS as a Security Escort and retiring again in 2006.

During his younger years he was an usher at the White Rock Presbyterian Church, a Scout Leader, coached Little League Football and Baseball teams. In 1962 he won The Los Alamos City Bowling Tournament for high Singles and Team Events.

Later he was Captain of a Boat Club in Lake Havasu City, AZ for 6 years and in 2006 he won the Cribbage Tournament there. He loved to hunt, fish, garden and travel. He joined the Los Alamos Benevolent Order of the Elks in 1960 and went through all of the offices until he reached the Office of Exalted Ruler in 1965-1966 and then repeated this office again in 1991-1992. He was a Ritual Judge for 9 years, served 5 years on the Board of Trustees and was Treasurer for 1 year.

In 1977-1978 he was appointed District Deputy Grand Exalted Ruler. He became New Mexico State Elks President in1983-1984. After this he became Grand Lodge Chairman for 2 years.  He was elected a Life Member in 2010.  He was also a member of the American Legion Veterans of Foreign Wars, and Eagles.

He was a very giving, caring man who never meet a stranger and a wonderful husband and Father. He will be missed very much by his family and friends.