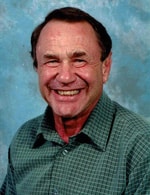 Dr. William Jerry Parkinson (Jerry) died on April 17, 2018 in Albuquerque, NM at the age of 79 due to complications from melanoma. He was born on February 4, 1939 ​in Salt Lake City, UT to William J. and Venita Fagg Parkinson.

Jerry was a ​team leader and technical staff member for the Chemical Process Development Team in the Applied Engineering Technology Group in the Engineering Sciences and Applications Division at Los Alamos National Laboratory. He worked extensively in the development of intelligent control systems for many years before retiring from LANL.

Jerry served on the editorial advisory board for the Journal of Intelligent and Fuzzy Systems and served as an Adjunct Professor in both the Petroleum and Chemical Engineering Departments at the New Mexico Institute of Mining and Technology. He ​co-edited the book ​Fuzzy Logic and Probability Applications: Bridging the Gap​ and received a patent for his invention of ​a fossil fuel furnace reactor for simulating a continuous processing plant with a batch reactor​. A lifelong learner, Jerry earned three masters and two doctorates, the first Ph.D. in Chemical Engineering from the University of Southern California and the second in Electrical and Computer Engineering from the University of New Mexico.

Jerry dedicated himself to whatever piqued his interest. For many years, he spent his weekends in Moab, UT building a log cabin and enjoyed hiking with his friends from work. He ran the Boston Marathon eleven times. He loved working on restoring his Corvettes (C1, C3) and working out at the Los Alamos Fitness Center where he had many friends. At age 71, he placed second in Men’s Bodybuilding 50+ and third place in 60+ at the 2010 OCB Southern Rockies Natural. Jerry was generous, well-liked, and loyal to his many friends. He was always willing to lend a helping hand and was fun to be around.

Thank you to Dr. Mesibov, Dr. Rixe, and the staff at Los Alamos Medical Center, UNM Hospital, and Kindred Hospital for their compassionate care.