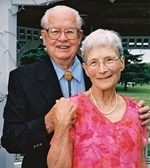 Don was born in Johnstown, Pennsylvania, the first child of Donald Roswell Harris, Sr. and Leora Ann Long Harris. He and his younger brother Richard grew up in Johnstown, Pennsylvania and attended the Johnstown Senior High School. A science teacher there recommended Don for a national Science Talent Search (sponsored by the Society for Science & the Public). Don was one of the top ten finalists in 1943. The award allowed him to attend Carnegie Institute of Technology in Pittsburgh. In 1944 he was drafted into the U.S. Army and was trained as a rifleman. Instead of being sent overseas, Don was stationed in Los Alamos, NM where he worked as a quality control inspector at S-Site until the war ended. On military leave while in Los Alamos, Don enjoyed exploring and hiking the mountains and canyons and grew to love the area.

Back at Carnegie Tech after the war, he completed a BS in Physics and an MS in Mathematics. He went on to Princeton and worked toward an advanced degree in Physics. While there, he met Janet Helen Bradley. They married five months later. Don left Princeton in 1954, having been awarded a Masters in Physics, and the couple moved to Pittsburgh. Don worked for Westinghouse, then for Bettis Atomic Power Laboratory in Pittsburgh, for a total of 14 years. His research during this time was focused on development of nuclear power for submarines. He and Janet had planned a large family, and during those years in Pittsburgh they had six children.

In 1968 the family moved to Los Alamos after Don accepted a position with the Los Alamos Scientific Laboratory where his nuclear physics work continued. Their seventh child was born in Los Alamos. Don enjoyed sharing his love of the mountains with his family, and took them on hiking, camping, and exploring excursions throughout the southwest. Don and Janet were involved with many other activities in Los Alamos and always remembered their years there with fondness. Don and Janet stayed in Los Alamos for seven years, where their two eldest graduated from high school.

In 1975 the family moved to Ballston Lake, New York, and Don became a professor at the Rensselaer Polytechnic Institute (RPI). He obtained a PhD in Nuclear Engineering, researched and taught classes on nuclear power and held the position of Director of the RPI Research Reactor Critical Facility for 25 years. He became a Fellow of the American Nuclear Society (ANS) and received the 1993 ANS Award for Excellence in Reactor Operations. He retired from RPI in 2001 as Professor Emeritus. Don’s lifelong passion for learning continued to be a mainstay in his retired life. He continued to mentor graduate students at RPI and stayed involved at RPI for many years. He became an active Rotary Club member and supported local libraries and community colleges.

In 2011, Don and Janet moved to a senior living community in Englewood, CO to be closer to family. They enjoyed getting to know others in the community, and Don continued as a member of the local Rotary Club. Most especially, Don and Janet loved spending time with their children and grandchildren. Don had a deep and abiding love for Janet. He absolutely relied on her presence until her last days. Janet passed away in late December 2017.

Throughout his life, Don was an enthusiastic learner. He loved to read and he loved to encourage others to read. He loved every kind of art. He loved to sing and to garden. He loved to travel. He loved to learn about – everything! He loved having a big family, and was proud of all of his children and grandchildren. He will always be missed. In his memory, please consider making a donation to a public library.