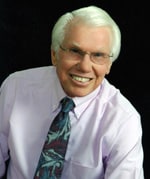 Don received his Bachelors degree in Geology from UCLA and enlisted as an officer in the Army Corps of Engineers, where he served in the Korean Conflict. After the war, Don attended UT Austin on the GI Bill and pursued a graduate degree in petroleum engineering. While working on his Masters, Don started dating another UCLA alum, Mary Louse Cook. Don and Mary married and moved from Los Angeles, California to New Mexico in 1959, where Don quickly put his degrees to work at Los Alamos Scientific Laboratory.

Don initially worked on the Rover Project. Then, taking up the challenge from Director Norris Bradbury to think big and create innovative ideas, Don transitioned to the earliest work on rock melting in deep drill holes. In 1971, he joined the Lab’s team on the newly launched Hot Dry Rock (HDR) Geothermal Development Project. Don spent the next 40 years developing and demonstrating the proof of concept of HDR. His work was a key factor from the early days when the technology was simply in its conceptual stages, through its many early development stages, and finally in the clear demonstration of the practical extraction of useful amounts of energy from the earth.

He was invited as a technical expert by the governments of Japan, Australia, Italy, and the Philippines to share his energy development knowledge with them. His motto became, “You can’t cool Mother Nature!” Don, along with project partner David Duchane and editor Vivi Thomas Hriscu chronicled their findings in Mining the Earth’s Heat: Hot Dry Rock Geothermal Energy, considered the ultimate reference on HDR geothermal energy development. To Don, the book was his thesis and a record of his proudest work. The ubiquitousness of this potential energy source is “astonishing — and so simple,” Don said. “The Earth is the battery.”

Alongside his scientific life, Don enjoyed exploring the Colorado Plateau with his family, the Sierra Club, and his children’s Boy Scout and Girl Scout troops. Weekends were filled with family outings to ski, picnic, or hike in the Jemez Mountains. Don also loved to run, running track at UCLA and later competing in Masters track events. Don was a founding member of the White Rock United Methodist Church. In 1980, after losing his wife Mary to cancer, Don was reacquainted with Joann Smith, who had also recently lost her husband Duane (Smitty) Smith. Joann and Don knew each other as neighbors at the Sycamore apartments in the early 1960s. Don and Joan married and built a new life together, enjoying travel to many countries, parties at their home in White Rock, and later at their home in Los Alamos.

Don has been a member of the United Church of Los Alamos since the early 1980s, where he has served in many capacities including as President of the Executive Council. He also loved to sing in the church choir and was a member of the Jemez Jarmonies barbershop quartet, singing baritone as a consummate fan of Dixieland jazz.

In October 2017, Don moved into Aspen Ridge and enjoyed his many friends who also lived there, as well as the caring staff. Early Sunday morning, December 24, surrounded by family, Don succumbed to the effects of a respiratory infection coupled with a devastating hip fracture.

A memorial service wil be held at 11 a.m. Saturday, Feb. 24 at the United Church of Los Alamos. There will be a reception following. To honor his memory, donations can be made to the United Church of Los Alamos. Don urges us to continue in his footsteps: To reduce our consumption of fossil fuels, love and protect Mother Nature, and lobby our elected officials and the scientific community to support HDR geothermal as an alternate energy source. “I dedicated my life to geothermal energy, and I would love to see it finally succeed.”