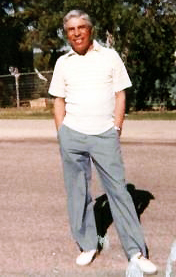 On Memorial Day, Monday, May 27, 2013, as a result of a recent illness, our beloved father, Donald (Adonias) Ortega, 87, passed from this world into the open arms of the Lord.

Donald Ortega was a former resident of Los Alamos and resided in Idaho Falls with his daughter, Suzanna and son-in-law, Andrew Phillips since July 2011. Donald was born on March 13, 1926 in Las Vegas, NM to Maggie Ortega Trosper. As a young teenager, his first job was working for the railroad in Southern New Mexico. When he was sixteen, he enlisted in the United States Navy, serving in the World War II and the Pacific Fleet, as well as the Korean War.

After serving, Donald worked for Timm’s Electric and JS Torres in Las Vegas before owning his own appliance repair business known as Ortega Appliance Repair in Los Alamos. Donald loved to work in his shop, tinkering on all types of projects and loved collecting tools. In his later years, he loved going to the casino and eating out. Donald was well known across the community and a generous man with a big heart (lots of cookies and candy for the kids).

He enjoyed talking to everybody every place he went, especially the grocery store where he knew many a client whose stoves or refrigerators he had to fix. He shared what he had with his family and friends. Donald was a true patriotic American who loved the red, white and blue. He will be greatly missed.

In lieu of flowers, the family requests donations to the Wounded Warriors Project or the National Autism Foundation. The family of Donald (Adonias) Ortega has entrusted their loved one to DeVargas Funeral Home & Crematory of the Española Valley (877)-747-3600.