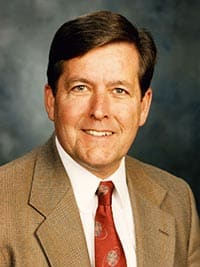 The son of Robert and Marian Hayes, he was born in Minneapolis, Minnesota on September 16, 1938, the second of three children.

He was preceded in death by his parents.

He is survived by his wife of 63 years Jan Hayes nee Gamble and his two children, daughter Denise and her husband Ryan, grandsons Nicholas and Alec, his son Doug and his wife Kathryn, his sister Barbara, and brother Bobby.

In 1957 Dennis met Jan, the woman with whom he would spend the rest of his life. They were married in 1960 in Albuquerque, New Mexico. He was blessed with an insatiably curious mind and a persistence that eventually put him on a path to his first job at Sandia National Laboratories as a file clerk at the young age of 18. Officials at the lab were so impressed with him that they helped finance his college education at UNM where he earned a B.S. and later an M.S. in Physics, his primary field. He later attended Washington State University under Sandia’s Doctoral Study Program where he received his PhD in Shockwave Physics in 1972.

Dennis rose steadily through the ranks at the Labs, culminating his 43 year-long career there as Director of the Labs’ Research and Development Coordination. He then became President of Lockheed Martin Nevada Technologies. Two years later he became a consultant for Los Alamos National Laboratory doing cutting edge material shockwave science. This work led to his nomination and appointment as a Fellow of the American Physical Society, an accomplishment that he was honored to receive.

His contributions to the field of physics and management lived on through his many colleagues that remember him for his professionalism, his finely-honed people skills and his special brand of humor that he often used to ease the tensions that characterized high-expectations environments. Dennis Hayes was a firm believer in the possible, always willing to entertain new methods to solve difficult problems.

His open door policy was a breath of fresh air for all who worked for and with him throughout his long and illustrious career. A soft-spoken man with boundless inner personal strength, Dennis knew his limitations but was always willing to challenge and exceed them whenever possible. There was never enough time for him to accomplish all that he had set out for himself, but that fact never deterred him from offering an outstretched hand or a comforting shoulder to those in need.

A scientist’s scientist, he often spoke about the wonders of the universe in believer’s terms and frequently expressed certainty that a higher power was at work in creating all the wondrous beauty that surrounded him, especially that which he richly enjoyed while indulging in his favorite pastimes of fly fishing in America’s many streams, classical music, traveling the world, and cooking from Julia Child’s Mastering the Art of French Cooking. He also believed that work didn’t always deserve a paycheck and spent nearly ten years volunteer teaching higher mathematics at the East Mountain High School and was fully engaged in supporting his beloved wife Jan’s efforts in preserving and protecting New Mexico’s Black Bears.

Dennis Hayes was a proponent of the ‘Will Rogers school’ when it came to strangers. To him, strangers were just friends he hadn’t as yet met. He was the consummate advocate for anyone displaying passion, patience and persistence. His respect for all people, no matter their political or ideological persuasion was born of a deep-seated belief that to do good meant to be good and that to be good one must have an open mind. Dennis was above all a kind, gracious and caring man who was always there for his friends and especially his two wonderful children Denise and Doug and grandchildren Nicholas and Alec who he adored. Dennis will be remembered for many things by many people, but he will always be remembered.

The comet’s tail burns bright, illuminates and fades, but a man’s life, lived to the fullest, will always and forever be visible in the heavens and in our hearts. God rest his immortal soul and comfort his family in their time of grief. His loss is profound to all who knew and loved him.

A memorial service will be held on Wednesday, January 18th at 10:30 am at the Daniels Funeral Home located at 7601 Wyoming NE, https://www.danielsfuneral.com/wyoming-chapel. The service will be followed with interment at 1:00 pm at Sandia Memory Gardens, 9500 San Pedro NE in Albuquerque.