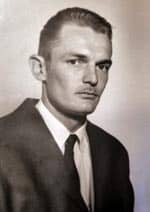 David S. Warren, 77, a resident of Alcalde, passed away as a result of surgical, medical, and rehabilitating complications, incurred since late last summer.

David entered eternal life on April 2, 2018, while in the peace and comfort of his home, with his loving wife and family by his side.

David was born on February 3, 1941 in Gilman, Colorado and raised in Red Cliff, Colorado. After graduating high school, David enlisted into the United States Navy and was stationed on the first nuclear-powered aircraft carrier, the USS Enterprise, during the Vietnam War.

David was always active. He was an avid and successful runner is his mid-30’s to early 50’s, qualifying for the Boston Marathon a number of times, and ran with Club 1663 and the Atomic City Road Runners Club in Los Alamos, New Mexico. David enjoyed many hobbies over the years such as gunsmithing, leather work, bow hunting, badminton, hiking, and snowshoeing. He was a very giving, caring and loving man, adored by his wife and family.

A rosary will be recited on Monday, April 30, 2018 at 6:00 p.m. immediately followed by a eulogy of David’s life, in the Sangre de Cristo Chapel of DeVargas Funeral Home & Crematory. Burial will take place on Tuesday, May 1, 2018 at 1:30 p.m. at the Santa Fe National Cemetery. The family of David S. Warren has entrusted the care of their loved one to DeVargas Funeral Home & Crematory of the Española Valley. 505.747.7477 – www.devargasfuneral.com.