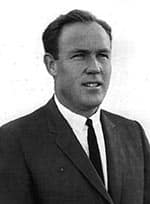 Clint Webb, 82, peacefully passed away in his home with his loving family by his side. He fought a long, courageous and dignified battle, but the long term effects of Alzheimer’s took its toll.

Clint was born on January 14, 1936 in Brigham City, Utah and adopted by Bert and Hattie Webb shortly after. He was adored by his mother and he loved and adored her until she passed away when he was 15 years old. He grew up in Las Vegas, NV and met his wife while in High School, but they didn’t start dating until after they both graduated. Clint and Shirley were married November 23, 1957 and celebrated their 60th wedding anniversary last November.

Clint started his career in 1956 with EG&G at the Nevada Test Site. He spent months on the Eniwetok Atoll in the Marshall Islands photographing weapons testing. He was part of Operation Red Wing, Operation Hardtack, Operation Hardtack Phase II and Operation Cherrypicker. He worked on Project Rover: Kiwi A, Kiwi B-1A, Kiwi B-1B, Kiwi B-4A, Nerva NRX-A2 and NRX-A3 reactors. He also worked on high altitude test shots in Alaska. His work involved the high speed streak photography and imaging for weapons testing.

He was a wonderful father, a loving husband and a kind man. He loved camping, fishing and boating with his family. He loved hunting with his son, grandson and friends. He took up snow skiing when he was 54 years old. He loved scouting and received his Wood Badge while he was a scout leader, which he did for many years. He was an avid astronomer and photographer. He had a wonderful antique camera collection. He taught his children, grandchildren and great grandchildren the love of stargazing and photography. His love of gardening was apparent when you visited his home. He was an expert prankster and taught his children how to laugh and/or cry. He was the worlds best handy man and after retirement, he started a home improvement business. He could fix, build and duck tape just about anything.

A memorial service will be held for Clint on Monday, June 11th at 11:00am at the White Rock LDS Chapel. His grave side service will follow at 1:30pm at the Guaje Pines Cemetery in Los Alamos.