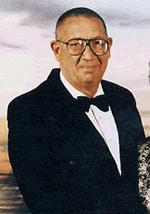 He was born August 8, 1930 in Dewey, Oklahoma and had one brother, George Mader, Jr who died in 2002. He married Emma Jean Sinclair June 12, 1960 and they had one son, Charles L. Mader, II. He attended Oklahoma City University, Oklahoma A and M College and University of Kansas.

He became a staff member of the Los Alamos Scientific Laboratory in 1955 where he worked until his retirement in 1986. He Consulted at the laboratory until 2005. He was a Fellow of the American Institute of Chemists, recipient of the Los Alamos Distinguished Performance Award and was the organizer and first Coordinator of the Los Alamos Fellows. He was listed in Who’s Who in the World and in America. He was a member of the National Academies’ Technical Assessment Board Panel on Armor and Armaments. After retirement he became president of Mader Consulting Co. Dr. Mader did numerical modeling and consulting for Government and Industrial organizations on Explosives, Propellants, and Tsunami Waves.

In 1959 he became the 65th mountain climber to have climbed the 54 Colorado peaks above 14,000 feet and climbed 95 of the 100 highest Colorado mountains. He climbed Monta Rosa and the Matterhorn among other Swiss mountains.

He and his wife, Emma Jean Mader, skied together for over 50 years at ski areas from New Zealand to Alaska including the Tasman glacier and heliskied in Canada. They skied together more than 3,000 days, after retirement often more than 100 days a year. In 1998 they skied together 136 days by skiing in the Southern and Northern continents.

Dr. Mader was the program manager and author of four of the Los Alamos Series on Dynamic Material Properties. The data volumes include Shock Hugoniot Data, Shock Wave Profile Data, Explosive Property Data, Explosive Performance Data, Peremx Data, Volume I, Volume II, and  Volume III. They were published by the University of California Press in 1980-1982.

Dr. Mader studied tsunami waves and was the editor of the journal of the International Tsunami Society The Science of Tsunami Hazards for over 20 years. He was the author of the book Numerical Modeling of Water Waves – 1988 and 2004. His most recent tsunami research field was  mega-tsunamis  which are waves over 100 meters high resulting from asteroids, nuclear weapons or landslide impact such as the 1958 Lituya Bay Tsunami which washed out trees to a maximum altitude of 520 meters and from 50 to 200 meters throughout Lituya Bay.

Charles Mader was Scoutmaster of Boy Scout Troop 122 at the Los Alamos First United Methodist Church from 1974 to 1985.  The Troop had 48 Eagle Scouts during those years. He received the Scouting Silver Beaver Award and the Methodist Church Cross and Flame award for his work with youth and Scouting.

A memorial service will be held on Saturday, August 25th at the First United Methodist Church of Los Alamos at 10 AM.

In lieu of flowers, donations may be made to The First United Methodist Church of Los Alamos for The Boy Scouts of America. The family has entrusted the care of Dr. Mader to the DeVargas Funeral Home & Crematory of the Espanola Valley.