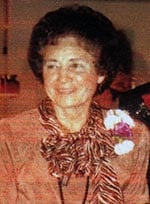 Celia G. Lujan, age 91, a resident of Nambe passed away peacefully on Sunday, September 9th, 2018 surrounded by her loving family.

She was a devoted Catholic and lived a life close to God. She always kept her faith in the Lord and was a member of Nuestra Senora de Guadalupe Valle de Pojoaque Catholic Church.

She was a very hard worker and great homemaker. Our mother will forever be known for her amazing tamales, red chile, tortillas, sopa, biscochitos, and empanadas. She took pride in her garden of chile, and many vegetables she planted. She took pride in keeping her yard free of weeds and snow during the winter; and was always there to help her in-laws with the farm and animals.

Celia was a devoted wife, mother, grandmother, great-grandmother, sister, sister-in-law, aunt and neighbor. She was married 55 years to the late, Elisandro Nestor Lujan.