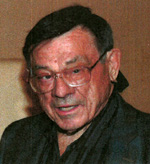 Bruce Noel departed this world from his home in Espanola, New Mexico on June 18, 2017.

Bruce was born in York, Pennsylvania on September 13, 1934. He began his working career as a bartender and truck driver there. Given the opportunity to start college at the age of 22, he completed his undergraduate studies at Drexel University in Philadelphia, received his M.S. at Case in Cleveland, and his Ph.D. in Electronics Engineering from UNM in Albuquerque while also working at Sandia Laboratories. For two years after he finished his doctorate he taught electrical engineering at UNM.

Bruce went on to spend his career working at Los Alamos National Laboratory eventually becoming a Group Leader. He mentored several technicians who went on to become staff members during his tenure there.  After retirement he and some colleagues formed a scientific research company called FluoreScience, Inc.

He was president of Sigma Pi Fraternity at Drexel University. He was older than the other brothers and every one of them learned from his leadership. He was a member of Tau Beta Pi, the oldest engineering society in America that honors attainment in the field of engineering.

Many of his colleagues described Bruce as a Renaissance Man because he wasn’t “just an engineer;” he also had a real appreciation for the arts. His list of interests and accomplishments is long and varied. He could talk intelligently and answer questions about almost any subject. He was a sort of human Wikipedia.

Bruce was hooked on classical music when he was exposed to it at the age of five. Later, opera became his consummate passion. He had an encyclopedic knowledge of it, and missed only one production of the Santa Fe Opera in 49 years. Besides going to the Santa Fe Opera, he and Sue, his wife of 52 years, went to operas in Rome, Moscow, Palermo, Paris, San Francisco, Vancouver, and New York.

Over the years he played football and ice hockey, rowed crew, skied, wrestled, and swam.  Some of his happiest hours were spent fly fishing. After he became too ill, he regretted he couldn’t go fishing just one more time.

Bruce and Sue shared similar tastes in food, wine, music, books, humor, films, and, especially, travel. They traveled extensively in the wine regions of Europe, New Zealand, Canada, and the U.S. Sue eventually convinced Bruce to try Costa Rica, Mexico, the Caribbean, Greece, and Russia, places not necessarily noted for their terrific wines. During their travels Bruce was on the trail of the best restaurants and wines available. Eating in renowned restaurants with wonderful food and wine was akin to a spiritual experience for both of them.

After they visited some of the great vineyards and wineries in Europe, Bruce’s interest in wine expanded beyond consumption to all aspects of wine production. He became the “go-to guy” at wine tastes for questions about grape types, producers, and esoteric information. He planted vineyards in Alcalde and Velarde, New Mexico. In 1998 he built and opened Los Luceros Winery, where he produced wines made from the grapes he grew. He was a founding member of the New Mexico Vine and Wine Society.

He leaves behind his wife Sue; his sister Barbara and brother-in-law Ray Kuntz and his brother Brian Noel, of Pennsylvania; his sister-in-law Sherry and brother-in-law Gene McClung, of Texas; as well as numerous nieces, nephews, grandnieces, and grandnephews. He was preceded in death by his father Bill and his mother Elva Noel.

Thanks are due to his and Sue’s many friends who visited and called during his difficult final illness, and to his dedicated nurses from Giving, especially Felicia Torres who went above and beyond the call. Thanks also to Joe Montoya, Maxine Blake, Hilario de Vargas, and his wife Yvette for their invaluable help.

A memorial to remember Bruce’s time among us will be held on July 9 at Quail Run, 3101 Old Pecos Trail, Santa Fe, NM at 1:00 PM. The family of Bruce Noel has entrusted the care of their loved one to the DeVargas Funeral Home & Crematory of the Española Valley. 505.747.7477—www.devargasfuneral.com.