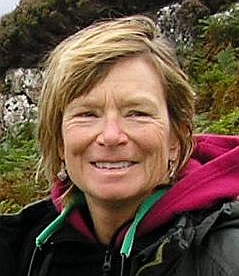 Bonnie Murchie Koch passed away on Wednesday August 28, 2013 at her home in Los Alamos, New Mexico.

Bonnie was born July 20, 1954 in Bloomington, Indiana, the third daughter of four children of William and Barbara (Hamilton) Murchie. Bonnie graduated from Broad Ripple High School in 1972 and went on to receive a BA in chemistry in 1976 with Phi Beta Kappa and an MS in geophysics in 1979 from Indiana University at Bloomington, Indiana. Bonnie was an acclaimed soloist and playwright in high school productions.

After completing her education, Bonnie worked in the petroleum industry in Denver, Colorado where she met and married her beloved husband Richard Koch in 1985. They enjoyed camping, sailing, skiing, and hiking. Bonnie enjoyed sailing at Lake Heron in New Mexico and the San Juan Islands of Washington, hiking and camping in the mountains of Colorado, and traveling in the British Isles, Europe, the Mediterranean, Tibet, Bhutan, and Nepal.

Bonnie was an accomplished musician and poet and played the piano, guitar, and bagpipes and very much enjoyed playing in local pipe bands. She was a member of the Dharma community and loved her pets and was noted for rescuing and caring for abandoned animals.

Bonnie is survived by her husband Richard, siblings Sue, Frances, and William Jr., nieces Angela, Amanda, and Jessica, nephew William III, and grandniece Josie. Donations in her memory can be made to your local animal shelter.