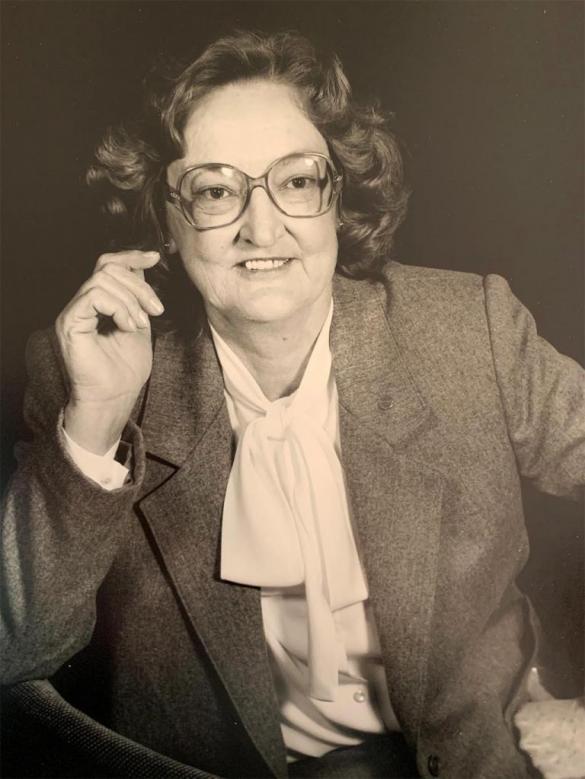 Bettie was born on August 18, 1929 in Roswell, New Mexico to parents, Jewell Ryan and Carleton Poe, both from well-known families in Chavez and De Baca counties.

When her parents divorced, Bettie moved to her grandparents’ homestead near Ingleville, NM with her two sisters. Bettie’s mom worked as a clerk in the De Baca County Clerk’s Office in Ft. Sumner and Bettie would stay with her during the summer.

Bettie and her sisters attended first through eighth grade in the one room schoolhouse at Dunlap. During this time, Jewell married a local rancher, J.W. Killgo, who owned the gas station, small general store and post office near the schoolhouse.

After finishing primary school, Bettie moved to San Diego, CA to live with her grandmother, Cora Mae Poe, and attended high school until graduating in 1947.

She met her future husband, Vernon Kerr, at Highlands University in Las Vegas, NM where he was earning his Master’s degree in chemistry. Every month he went to the registrar’s office to collect his GI bill check and this is where he met the assistant registrar, Bettie. He says he had to marry her since she had all the money!

When Vernon took a job at Los Alamos Scientific Laboratory, the couple moved to Espanola and later to Los Alamos. They had three children, David, Leslie and Stuart.

Bettie became engrossed in Cub Scouts and Girl Scouts. She started as a Girl Scout troop leader and later was elected as the president of the Sangre De Cristo Girl Scout Council. Bettie also contributed to her community as a member of the service sorority Beta Sigma Phi, the National Federation of Republican Women, the NM Republican Central Committee and the American Legion auxiliary.

Bettie was elected as Los Alamos County Clerk and also served two terms as Probate Judge. She was a charter member of the White Rock Presbyterian Church where she served as an elder, deacon and Sunday school teacher.

Bettie was preceded in death by her parents, Jewell Killgo and Carleton Poe; son, Stuart Kerr; and sister, Doris McCarter.

The family of Bettie L. Kerr has entrusted the care of their loved one to DeVargas Funeral Home & Crematory of the Espanola Valley 505.747.7477 www.devargasfuneral.com.