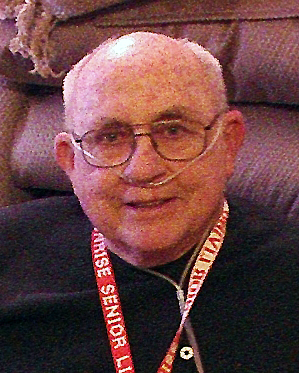 Roy had recently moved to Colorado, but lived the majority of his life in Los Alamos and White Rock, NM.

Roy was born in Roanoke, VA to Ethel and BR Saunders and attended Roanoke College where he obtained a degree in Physics.

After college, he joined the Air Force and was assigned to supporting the scientific testing of nuclear devices through high speed photography and other assignments.

That work lead Roy to Los Alamos, where he continued to work at Los Alamos National Laboratory, after being honorably discharged from the Air Force.

While working in the Air Force and at the Lab, he was present at nearly every atmospheric and underground test that was conducted by the US. He commented many times about the honor of working with so many people that were in the top of their field of physics and other scientific areas.

Roy enjoyed the camaraderie of the early days in Los Alamos with dances, poker nights, and social gatherings at friends’ houses.

He also enjoyed long distance horseback riding and raised and bred Arabian horses. After his son, Ben, was born, Roy volunteered with the junior soccer teams and with Ben’s Boy Scout troops.

In In the last 15 years, Roy became quite the competitor in Sporting Clays shotgunning and was the senior champion in New Mexico and the district for multiple years.

Throughout his life, Roy made many good friends and memories to share. He was known for a quick wit, gruff laugh, big smile, and very caring heart for those close to him.

Always a fan of a good meal, he very much enjoyed a good burrito with New Mexican chile, usually christmas, and loved dark chocolate.

Roy is survived by his brother Robert C. Saunders, his son Benjamin Raemer Saunders, and two granddaughters. A memorial will be held at Fuller Lodge in Los Alamos at 1 p.m., April 27, all are welcome to attend.