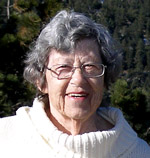 Barbara Lois Gilbert Storms, age 88, passed away peacefully on the afternoon of January 13th, 2016 in her apartment at Aspen Ridge in Los Alamos, NM.

She began her lifetime adventure in Inglewood, California, on March 24, 1927, born to Philip and Lois Gilbert. Most of her youth was spent in the Coos Bay, Oregon area where she graduated from North Bend High School just after her 17th birthday. She then started her college career at Stanford University studying Chemistry, but after the first semester she decided to change her major to journalism and attend the University of Oregon where she earned a bachelor’s degree in 1948. She moved to the East Coast for additional journalism coursework at Radcliffe College in Massachusetts before becoming assistant production manager for Glamour magazine in New York.

After three years, she returned to the West Coast to become advertising director of W & J Sloane in San Francisco. Intrigued by New Mexico, she moved to Santa Fe and then to Los Alamos in 1958 to join the Los Alamos Scientific Laboratory as a public relations specialist and the first editor of the LASL News then later served as lifestyles editor at the Los Alamos Monitor. During this time in Los Alamos, she married, had her only son Steven, and rubbed shoulders with a who’s who of famous scientists, astronauts, and politicians, both socially and professionally.

In 1978, she moved to Winnemucca, Nevada, with her son to work as managing editor of the Humboldt Sun. She worked there for only a year and a half to help a friend, who owned the paper, get the paper back on its feet. She then returned to the Los Alamos National Laboratory and worked as managing editor of the Los Alamos News bulletin. In 1985, she moved back to the San Francisco Bay area and joined the Lawrence Berkeley Laboratory, serving as editor of the quarterly magazine, LBL Research Review. While there, she experienced the 1989 earthquake.

In 1991, she retired and returned to New Mexico, where the ground doesn’t move. She was active with the Los Alamos Historical Society for whom she edited several books and served as chairman of its Publications Committee. Outside of work, she was a talented watercolor artist, enjoyed sewing, gardening, cooking, reading, and spending time with friends and family. She was a kind, loving person and was loved by all who met her. Even in difficult times her sense of humor came through and she always put others happiness before hers. All who knew her will dearly miss her.

Barbara was preceded in death by her parents and her younger brother Philip Gilbert Jr. Barbara is survived by her son, Steven; his wife, Deborah; and their two children, Alexander and Cassandra, all of Los Alamos; by sisters Judith Borcher of Sacramento, CA; and Gail Kearns and her husband, Walter, of Woodland Hills, CA; her brother’s wife, Patricia, of Fairfield, CA; ex-husband Edmund Storms, of Santa Fe, NM; and step daughters April Hill and Jillian Storms, of Baltimore, MD; and many nieces and nephews.

In lieu of flowers, memorials may be made to Doctors Without Borders (www.doctorswithoutborders.org/) or a charity of your choice. A celebration of life service will be held from 9:00 am to 11:00 am Saturday February 6th, 2016 at Fuller Lodge in Los Alamos. Please visit http://www.devargasfuneral.com/ for any updates or changes.

The family of Barbara Storms have entrusted the care of their loved one to the DeVargas Funeral Home & Crematory of the Espanola Valley. 505.747.7477 – www.devargasfuneral.com.