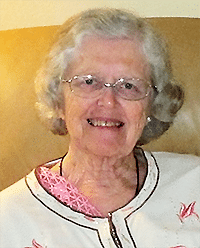 Bobbie was born November 18, 1932, to William E. and Christine M Reccius in Louisville, KY.  She graduated from Wittenberg University in Springfield, Ohio in 1953 specializing in music and education.

Bobbie was happily married to Calder A. Gibson in 1957 after he graduated from seminary school. Following many pastoral callings, Bobbie and Calder lived and served in Wantaugh, NY;  Bridgehampton, NY; Watermill, NY; Clear Lake City, Texas and Los Alamos, NM.

During this time, Bobbie taught in Seabrook, Texas and Los Alamos, NM while also teaching private lessons in violin and piano and serving as backup organist at church. Bobbie played in both the Santa Fe and Clear Lake symphonies with what she described as “fiddling around”.

Bobbie’s life was filled with music, love, family, cooking, teaching and giving. She lived her life selflessly serving God, inspiring all who met her. Her unconditional love of family and faith will keep her legacy alive for generations.

In lieu of flowers, memorials can be made to Lutheran World Relief, American Cancer Society or Christus Victor Lutheran Church in League City, Texas.