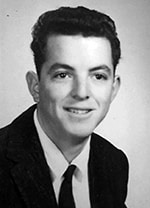 Anthony (David) Montoya passed away in Surprise, Arizona on September 13, 2018.

David was born in Embudo, NM, and graduated from Espanola High School in 1962. He joined the United States Army after high school. After completing his military service, he went to work for Pacific Telephone until his retirement.

He married the love of his life, Judy Espinoza, on August 23, 1965. The two spent 53 loving years together and raised 3 beautiful children.

David was preceded in death by his father Leo Montoya and mother Ernestine Montoya.

David is survived by his wife Judy, his children Cyndi, Shannon, and James (w/wife Andrea), his grandchildren Madison, Isabelle, and Christopher of CA, as well as brothers Tom and Rick Montoya, and sister Pali Montoya-Bowman of NM.

David was an avid cyclist, hiker, and wood worker in his free time. When he heard his was going to be a grandfather he got to work building cradles for the happy arrivals.

He was a loving devoted husband, father, and friend, and his kind heart will be greatly missed.