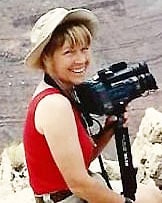 She was born in Hope, Arkansas and attended Radcliffe College, where she met Hans Ruppel. After they married in 1956, she completed a BA in Political Science at George Washington University. In August 1964, following a stint in New Haven, Connecticut, they moved to Los Alamos, New Mexico, with their three daughters, Robin, Wendy and Joanna.

Ann was an artist. She had a tremendously intelligent and creative mind, and, as a true Renaissance woman, excelled in a wide range of pursuits. In the 1960s, she participated in a series of workshops at Santa Clara Pueblo to learn all elements of crafting pottery. Ann dug her own clay, prepared it, and then smoothed coils into pots.  She experimented with and became proficient in several traditional Santa Clara styles.  She also studied silver smithing and created a number of silver items in the traditional styles. Some years later one of her silver bracelets was appraised by a local Santa Fe gallery as, “Navajo, ca 1960s”.

Ann was also an accomplished actress, performing in productions in Los Alamos and at the Don Juan Playhouse, an outdoor amateur theater. Ann’s performances received great acclaim; she was particularly proud of her 1966 performance in the lead role of Jean Anouilh’s “Antigone”.

In her youth, Ann was a prize-winning jitterbug dancer. She was drawn back to this early love of dance by her daughter Robin’s participation in folk dance. In the early 80s, Ann joined the Kolomeyka dancers of Los Alamos, who regularly performed folk dances from all over the world. Not only was Ann an accomplished dancer, she designed and made costumes for the entire troupe.

Throughout her life, Ann loved to paint and draw and was an art teacher in the Los Alamos elementary school system. In her later years, Ann turned to photography. She built a darkroom where she processed her own photographs: portraits of people she loved and nature of the Southwest. She also taught herself video-editing and applied it to interviewing people from the early days of Los Alamos to capture a slice of its rich oral history.

Ann was also an avid hiker and loved exploring the mountains and desert. One of her great pleasures was participating with the Wednesday Irregulars on their weekly hikes all over Northern New Mexico. Some of the closest bonds she made in her forty years in New Mexico were with friends she met through the Irregulars’ weekly hikes. With Hans, she also trekked in Nepal and “chased” total solar eclipses all over the world, including in India, Mongolia, Turkey, Venezuela and the Antarctic.

One of Ann’s great gifts was her kind and gentle heart. She brought this caring soul to help others, notably when she worked as a Hospice volunteer in Santa Fe. Everyone who knew Ann was affected by her kindness, love, and gentle, creative spirit.

In lieu of flowers, contributions may be made to the Los Alamos History Museum: https://www.losalamoshistory.org/donate.html.