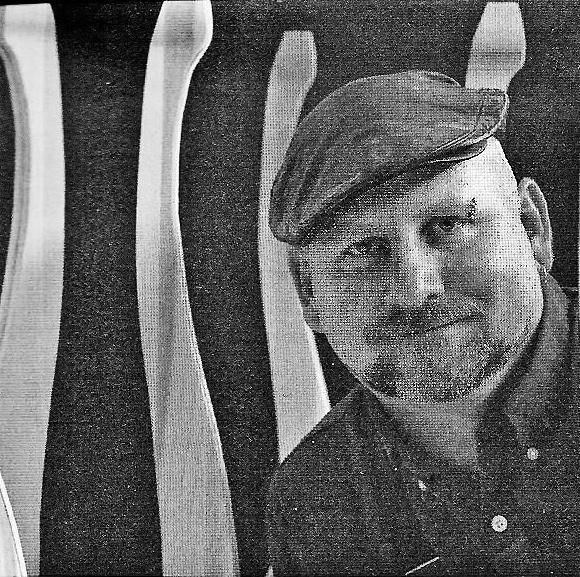 Andrew Jarrard Drake (Drew), who was disabled during the last 5 years of his life, died following a fatal fall in his Albuquerque apartment. He was 59.

He was born in Marengo, Iowa at 11:50pm on July 3, 1959. The 10 minutes short of the 4th of July didn’t prevent him from being a firecracker. He was the son of Joy Jarrard Drake and Duane Holmes of Drake, MD. He is survived by his mother, his sister Jill Rice and husband Scot Rice, stepfather Alfred Zeltmann, stepsisters Ann Zeltmann, Carol Hengstenberg and husband Bob, Stepbrother Tom Zeltmann and wife Kay. Nieces and nephews Nicole Rice, Cory Rice, Doug Zeltmann. Jarrard cousins Johnathan, Jennifer, Jamie Ian and Zeltmann cousins Abby and Rob. He leaves his aunts Ann Drake and Elizabeth Jarrard.

His childhood was pretty nice. He knew where he was in the world even as a toddler. He was fearless. He could toddle off from the Chapel Apartments visit blocks away and return before anyone could report the escape. In the cul-de-sac of Walnut Street, a tribe of similar towheaded short people inhabited the park where they peacefully organized their own activities. Every summer trips to Iowa enabled grandparents, aunt and uncles to entertain him and Jill with fishing, farm visits and quality time.

In high school he discovered Olions and theater as well as two confederates named Jim. His first job was managing at the Civic/Smith Auditorium. He graduated from Los Alamos High School in 1977 and attended UNM until he ran out of Theatre courses to prepare him for a career in technical theatre. Early jobs included Popejoy, PBS in Albuquerque and summers at the Santa Fe Opera.

His first out of state job took him to San Jose allowing exploration of San Francisco. Following this his move was to Pittsburgh to work at the Pittsburgh Public Theatre, movie sets including Silence of the Lambs and several years with Mr. Rogers Neighborhood. Cleveland Play House was marked with a heroic statue of Elvis Presley, which was displayed at the Rock & Roll Hall of Fame, a table for Dancing at the Lughnasa, which supported most of the cast, and a Model T truck for Grapes of Wrath. Then the President of the Theatre board posed leaning against it, he discovered the finish had hardly begun to dry.

Fifteen years at the Santa Fe Opera as head prop carpenter were made more memorable by organizing river tubing excursions, ending at Jack Aeby’s. Some of his sillier constructions included trees, which bloomed, died and re-bloomed, a small rolling platform, which allowed a non-dancing diva to be whirled around the stage, a harpsichord, which collapsed when leaned on and a Pedi cab, which allowed the rider to do gymnastics while rolling the Countess Frederika von Stade on stage.

He was a bonhomous soul. He would have loved to be called that. He loved words, word games, wordy songs, creating while listening to glorious opera, telling jokes and being the life of the party.

A small interment ceremony will be October 29th 1:00pm at Guaje Pines. A memorial party will be held at the Sheriff’s Posse Shack on November 24th at 2:00pm.