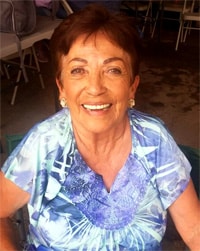 She was born on August 28, 1938, in Coyote, NM to the late Delubina and Elias Garcia, Sr. She was raised on a ranch alongside her six sisters and three brothers. She graduated from Española High School in 1957. She attended Business College in Albuquerque in 1958.

She went on to work for the State of New Mexico. Once she became a mother, she began her career with the Española Public Schools working as a teacher’s aide, allowing her time with her children. When her children were grown, she became a guard with Mason and Hanger with the Los Alamos National Laboratory in the year 1983 until 1991. Thereafter, her primary focus became her grandchildren and assuring she could take part in their upbringing.

She was the matriarch of her family and took pride in this role. Her compassion, kindness, and charisma made an impression on all who knew her. She was truly one of a kind and will be missed by many.

Viewing is scheduled for Tuesday, June 21 at 6 PM followed by The Holy Rosary at 7PM at DeVargas Funeral Home. Burial Mass will be held at Santa Cruz de la Cañada Catholic Church on Thursday, June 23 at 10 AM followed by the burial at Holy Cross Cemetery in El Lano.