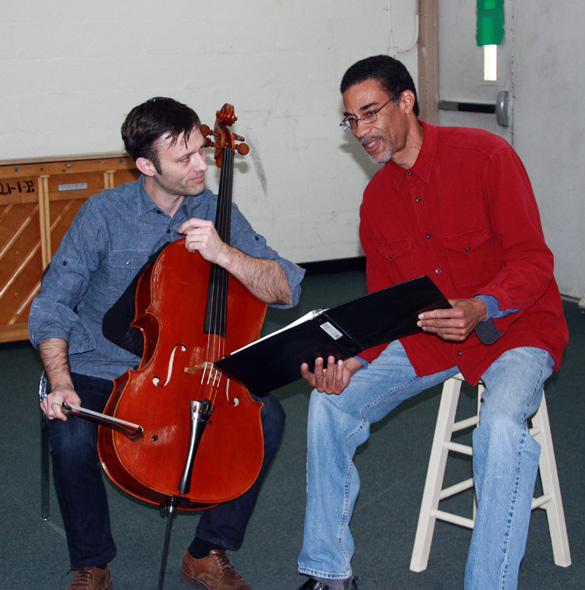 The Los Alamos Symphony Orchestra will present “Classics Closer,” the last concert of the season at 7 p.m., today at Crossroads Bible Church.

The Orchestra will perform “Tragic Overture” by Brahms, Symphony No. 8 “Unfinished” by Schubert, Finlandia by Sibelius, and a special treat, Haydn’s “Concerto in D Major” with guest cello soloist Robert Burkhart. Guest conductor William “Bill” C. Houston from Santa Fe will be at the podium.

Burkhart and Houston have been friends a long time, but they have never had a chance to do something together, Houston said. When Houston was asked to conduct the Symphony, he immediately thought of it as an opportunity to work with Burkhart.

Burkhart chose the concerto because it was a piece he loved but hadn’t had the chance to perform, he said. This is Burkhart’s first visit to the area. He flew in Sunday to rehearse with the Symphony Monday evening after performing a recital at home in New York City Saturday night.

“All the classical musicians know about Santa Fe because of the wonderful music there,” Burkhart said, adding that he is telling everyone about the other attractions, like beautiful scenery and green chile.

Burkhart has been following Houston around since a friend introduced them. Both went to school in Wisconsin, played with the New Orleans Symphony and lived in New York, Houston first, then Burkhart. They got better acquainted when Houston lived in Philadelphia and Burkhart in New York.

Houston grew up in Albuquerque and got his first taste of the viola in public school orchestras. He returned to the state about 2.5 years ago to concentrate on the viola and has been caught up in conducting and his radon business. He’s hoping to get back to the viola ASAP and is planning a trip to the east coast in search of a new viola.

Conducting in Los Alamos is not Houston’s first brush with a national laboratory. Sandia National Laboratories sponsored his Bachelor of Science degree at the University of New Mexico with a full scholarship (1976-80).

Houston opted to pursue a management degree to learn the administrative side of the arts. He was awarded the Carnation Company Fellowship (1980-82) to take the Master of Business Administration program in finance at Columbia University in New York City. While there, he was usually found with viola in hand, studying with the resident Composers’ String Quartet or playing in various orchestras. Finally succumbing to his first love midway through the MBA program, he resolved to pursue a career in music upon graduation.

Houston returned to Albuquerque to concentrate on viola at the University of New Mexico. He founded, conducted, and managed the Duke City Chamber Orchestra, a pre-professional training ensemble, to provide gifted but inexperienced players exceptional performance opportunities. After three successful seasons with Duke City and completion of the Bachelor of Music degree with distinction. His appointment as graduate assistant conductor coincided with receipt of the prestigious Advanced Opportunity Fellowship (1988-90).

Houston has played with viola sections in many orchestras in Louisiana, Texas, Colorado, Wisconsin and New Mexico, and soloed with the Albuquerque Philharmonic Orchestra in Berlioz’s Harold in Italy.

Houston has been mentor for both gifted and at-risk programs in the Albuquerque Public Schools.

In 1991, Houston founded The New Southwest Orchestra, a summer residency orchestra dedicated to music of American composers that performed throughout northern New Mexico, and was artistic director and conductor for four seasons. He was conductor for all musicals presented at the Albuquerque Little Theatre from 1993 to 1996. Houston was a member of the adjunct faculties at Essex County College in Newark, New Jersey and the University of New Mexico in Albuquerque, and was Executive and Artistic Director of The Orchestra at William Paterson University from 1996 to 2003.

Currently, Houston conducts Santa Fe’s string ensemble eSSO and finially gets to use his engineering background as owner of Alto Clef Radon Company.

Houston said it’s interesting to play with LASO. “I’ve been doing a lot of string orchestras and it’s fun to be in front of a full orchestra again. It’s working very well,” he said.

Burkhart combines a deep commitment to the existing cello repertoire with what the New Yorker magazine calls an “adventurous” spirit in new music. With performance credits at Alice Tully Hall, Bargemusic, Carnegie Weill Recital Hall, Merkin Hall, and The Rose Studio at Chamber Music Society of Lincoln Center, Burkhart has also appeared as a soloist throughout Japan as a member of the New York Symphonic Ensemble, and been featured in recital on WQXR’s “Young Artist Showcase.”

Burkharthas taught at Juilliard Pre-college, Mannes Prep, Syracuse University, and Music Conservatory of Westchester, and been artist-in-residence at Yale University and the Banff Centre for the Arts in Canada.

His recent CD “20/21: Music for Cello and Piano from the 20th and 21st Centuries,” features pianist Blair McMillen and the premiere of a work for cello and piano by composer Andrew Waggoner. Robert’s recording of solo Bach on the American Express commercial “Don’t Take Chances. Take Charge” has garnered national attention.

Currently, Burkhart plays with the American and Standford Orchestras and is in the pit for four Broadway shows. He also records for film and television. He also gives lessons and mentors a group of “little cellists.”

Orchestra members said LASO is very pleased Burkhart took time from his busy life to play with them.