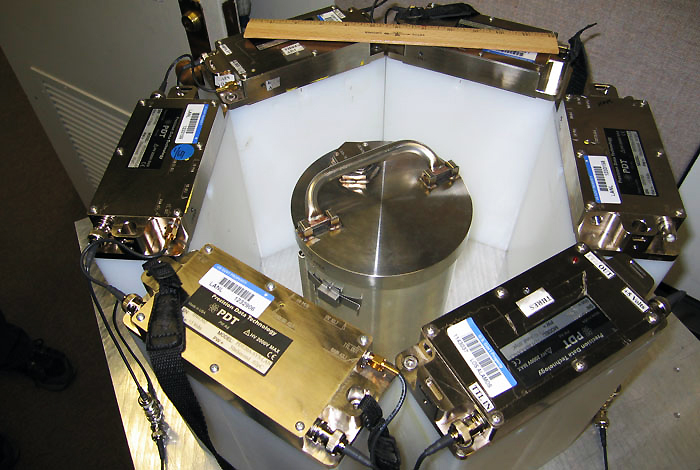 A neutron detector like this one at LANL is an invaluable national-security technology tool. Researchers at Los Alamos can help train and mentor the next generation of nation-security scientists thanks to formation of consortium led by the University of Michigan that focuses on R&D of arms control verification technologies. Courtesy/LANL

A consortium led by the University of Michigan that includes Los Alamos National Laboratory as a partner has been awarded a $25 million grant by the National Nuclear Security Administration (NNSA). The consortium of 13 universities and 8 national laboratories is dedicated to the research and development (R&D) of nuclear arms control verification technologies, including nuclear safeguards effectiveness.

“Los Alamos is excited to participate in the consortium as it will help us bring our long and unique history of nuclear expertise to a new generation of researchers who are passionate about national-security science,” said Nina Rosenberg, director of the Laboratory’s Nuclear Nonproliferation and Security Program. “Moreover, we will see significant benefit to our Laboratory through strengthened connections with the academic community.”

The new grant of $5 million a year for five years was announced this week by the NNSA.

“Developing the R&D expertise of tomorrow can take years to cultivate,” said NNSA Deputy Administrator for Defense Nuclear Nonproliferation Anne Harrington. “But we are linking national laboratories and academia by funding the next generation of researchers to perform complex research and gain an understanding of technical challenges in areas of major importance for the nuclear nonproliferation mission that can only be garnered first-hand at the national laboratories.”

Los Alamos’ nuclear expertise began with the birth of the Atomic Age. Since then, the Laboratory has established itself as a global leader in many areas relevant to nuclear arms control and safeguards technology, including methods for detection and nondestructive assay of nuclear materials, modeling and simulation of radiation transport, radiation signatures for detection of nuclear materials, and the physics of nuclear fission.

Through its participation in the consortium, Los Alamos nuclear-security experts will be able to provide mentoring, advice, training and scientific collaboration with consortium students. The Laboratory also can serve as the go-to resource for information about nuclear nonproliferation research and development, nuclear safeguards, treaty verification, arms control and other topics.

Nuclear arms control verification technologies provide tools to support and improve the ability of the U.S. Government to monitor compliance with nuclear arms control commitments and treaty obligations. Nuclear safeguards support the International Atomic Energy Agency’s mission to monitor the Nuclear Nonproliferation Treaty and the commitments of signatory countries to refrain from developing new nuclear weapons. Other work under the consortium will include efforts in geophysical modeling for the detection of underground nuclear detonations to support test monitoring.

Los Alamos has for decades provided the technical tools and training necessary for the International Atomic Energy Agency to verify obligations under the Nuclear Nonproliferation Treaty.

NNSA’s announcement of the consortium can be found here.