‘Not Quite Right’ Takes A Warm-hearted, Realistic Look At Dueling Expectations 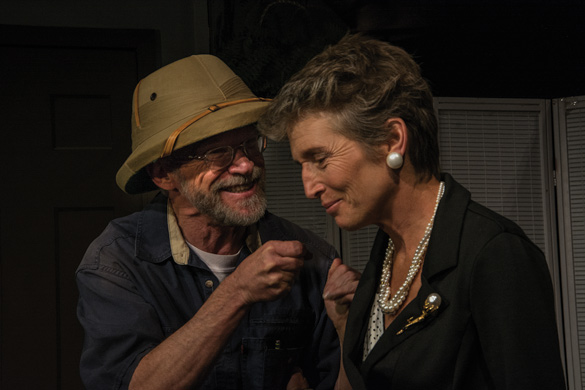 Benjamin describes the play as “an upbeat comedic family drama.”  Both acts of Not Quite Right” take place at 3 a.m. on two nights about a year apart. Three couples find themselves in situations where they are cranky and vulnerable,  attempting to cope with the question, “what’s enough?” No one in the play agrees about it.

Like many of Benjamin’s plays, this one focuses on couples. At 58, Marty (Eric Bjorklund)  has been laid off and is filling his time with new hobbies.

Marty is the sort of guy who takes skydiving lessons without informing his wife, and brings a woman friend by his studio to see his pots while his wife is out. We all know guys like Marty, charming but clueless.

Wife Carol (Dana Kline) is shouldering much of the financial burden and has many work responsibilities. Their lives and expectations of each other are going in different directions. Carol’s desire for her spouse to be more serious leads to her unintentionally belittling Marty, just as he is self-absorbed and inconsiderate—keeping her up late when she has an early meeting. 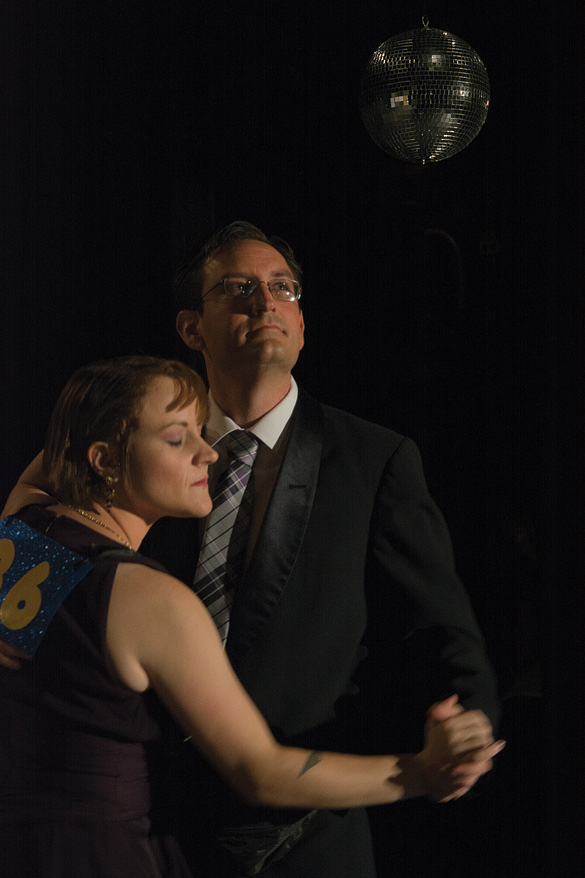 Meanwhile, a couple in their 30s is in the midst of a dance marathon while grappling with the question of whether or not to have another child. Husband Andrew (Brian Trujillo) says yes, while wife Jessica (Holly Robinson) has ethical and lifestyle concerns.

It turns out that Jessica is Carol and Marty’s daughter, and in a year, they will rendevous at the home of Andrew’s parents, once again at 3 a.m.

Friends of Carol and Marty from their college years, as well as co-grandparents to Andrew and Jessica’s children, Tom (Thomas Farish) and Sally (Gwen Lewis) have their own set of dueling expectations.

Tom, a failed would be writer is successful in business, but dissatisfied with his career. Sally is a pleaser who wants everything to be okay, even when it isn’t. Expectations for their son differ greatly.

All the actors do a fine job in this production. Kline tempers Carol’s exasperation with tenderness and makes her tendancy to worry relatable. Bjorklund is funny and vulnerable as Marty. His comic timing is excellant. Lewis brings a genuine warmth to the role of Sally.

Farish is a real standout as Tom, the least immediately “likeable” character in the play. He brings a depth and pathos to the character that makes him real to us, not just a foil for the others.

Deft direction by Dennis Powell steers the ensemble smoothly. I’d like to give a shout out to marathon dancers Joe Cowan, Teresa Montoya and Grace Willerton (in addition to Trujillo and Robinson) and their choreographer and fellow dancer Patrick MacDonald, and to the technical staff who provide great presentation.

Plan on a fun evening with some substance at its core.

LALT will present “Not Quite Right,” produced by Jeanne Adkins, for one more weekend at Los Alamos Little Theatre, 1670 Nectar St. Catch it at 7:30 p.m. Friday and Saturday Sept. 23-24.

Tickets are $14 for adults and $12 for students and seniors and may be purchased at the door or in advance at CB FOX or from Brown Paper Tickets. Tickets are $10. Visit lalt.org for more information.