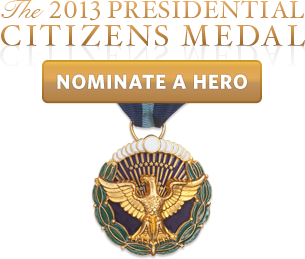 Who deserves the Citizens Medal?

Each year President Obama honors a handful of extraordinary Americans with the Citizens Medal, one of our nation’s highest civilian honors.

The Citizens Medal recognizes Americans for exemplary deeds of service outside of their regular jobs — people who feed the needy, who take care of our veterans, or who support our children.

Is there someone in your life who deserves to be recognized by President Obama?

There are nine days left before we close nominations on the 2013 Citizens Medal. Complete this easy nomination process before the public submission period closes:

Will you nominate a hero in your community?

Last year, people like you nominated more than 6,000 Americans from across the country and staff at the White House reviewed every single submission. Here are just a few examples:

Citizenship is fundamental to who we are as Americans. That’s why, at the last award ceremony, President Obama stressed the role it plays:

“We’re home to 315 million people who come from every background, who worship every faith, who hold every single point of view,” he said. “But what binds us together, what unites us is a single sacred word: citizen.”

There are thousands of people across the country making a difference, but we need your help to find them. Nominate a hero in your community today: