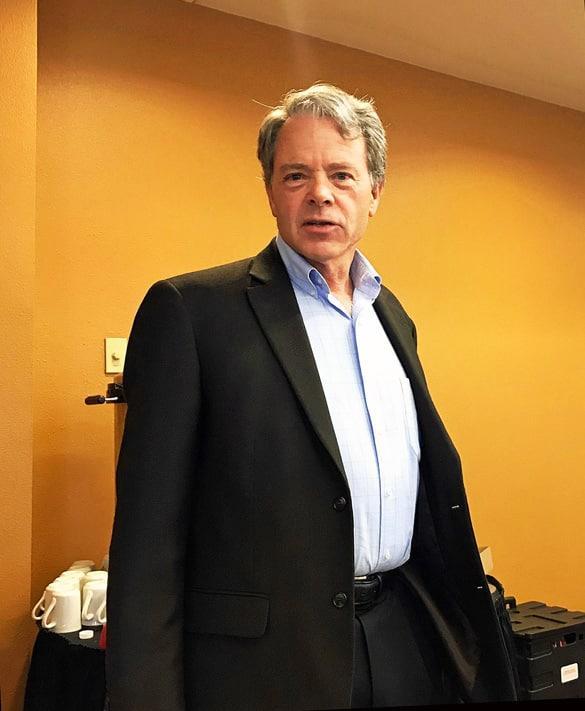 Goodrum was responding to comments and questions from Coalition Chair and Santa Fe Mayor Javier Gonzales regarding the plutonium pit production project. Gonzales told Goodrum the New Mexico congressional delegation has been very strong in their request that the pit contract occur at Los Alamos.

“One of the things I appreciate about (EM manager) Doug (Hintze) and Environmental Management and the new agency that’s been here is that there has been a really communicative and intentional effort to build partnerships at the local level by keeping us as knowledgeable as possible as to what’s going on. Even when they had to come back and tell us things we didn’t necessarily want to hear,” Gonzales said.

“I’m hopeful with your leadership here, that the NNSA Field Office will see that we can actually become good partners with that kind of dialog and honesty,” Gonzales told Goodrum. “For us as community leaders, obviously the importance of the environment and health and safety combined with economic development opportunities for our communities are all areas we think about a lot when we talk about Los Alamos.”

He also asked Goodrum if he could update the board on the status of the plutonium pit project. Referring back to Gonzales’s original comments, Goodrum said he agreed that even if it’s bad news, it’s better to hear it up front from the people who understand it than through other sources.

“I’m also very positive on NNSA enabling the contractor to do things partnering with the community. I think you’ll see that in our contract,” Goodrum said.

“Talking about plutonium pits, you know we have an obligation to do an analysis of alternatives, so we took the time to start that with the first AOA (alternatives for analysis) that went out. That narrowed it down to two potential options but now you really need to slow down and take the time to collect relevant information that you can use objectively to make a decision on behalf of the government,” Goodrum said. “So right now, we’re going through what I would call an engineering study to go to the next level of detail to better understand the pros and cons,” he continued.

Goodrum said the pros and cons must include lifecycle cost, upfront investment and a whole bunch of things that come into it. Asked if the issue would be settled as part of the new contract, Goodrum said he didn’t think he could answer that, in part because he doesn’t know the answer and because he was not sure of the alignment.

“I will say it will be done with the objective information. The other thing I can clearly point out is it’s not like they will uproot everything at Los Alamos and move it. Remember there’s an expansion and I talked (earlier) about a lot of money being invested in the future stockpile. How do we get the capability or capacity we need? Los Alamos will always be a center of excellence in plutonium. They are the experts. They have the equipment facility and you’re talking about how you can expand that capability to that you can meet future demands. I think that’s where the real question will come,” he said.

Earlier Goodrum told the board NNSA currently has a staff of about 75 with a ceiling of almost 90. He said he is putting a full-court press on building up staff to make sure NNSA always has the right technical expertise, that they make sure they are growing people for the future and help to continue to push some of the inhouse improvements.

Goodrum said as far as the contract he got the sense that a lot of people in the room know as much or more than he does about it.

“The target is by Oct. 1 to have completed the transition. I think you are all probably aware of the challenges in the government world of getting contracts, but we’ll continue to work through those aggressively,” he said.

Goodrum also spoke of the successes at LANL that he tracks, not just science but actual deliverables.

“Our mission is to support the nuclear deterrent. If you look at nuclear weapons where the average age is around 26 or 27 years, there’s a significant effort ongoing on life extension of those,” he said. He said Los Alamos is a key player for the W76 (nuclear warhead) which is almost complete and the B61.

He said there has been a lot of good work in the subcrits and that in the absence of underground testing, the Labs have done a very good job of utilizing other tools and experiments in order to continue to understand weapons and to be able to certify today’s and future stockpiles.

Goodrum said the new transuranic waste is just now being utilized to its full capacity.

“If you think about it, that’s the first Hazard Category 2 nuclear facility with NNSA in about a decade and it came essentially on schedule and on cost,” he said.

Goodrum said the commitment from LANL Director Terry Wallace on down is to maintain continuous safe and efficient operations during the transition to the new contract. He spoke of the efforts being made to improve federal oversight saying that while NNSA sometimes recruits some “very veteran experts” in special areas, they are also bringing in a cadre of the next generation.

“Another thing we’re doing is we’re leveraging across NNSA. I’ll never be able to have the level of expertise (needed) in Los Alamos on any given day for the things that come up, but we have significant reach-back and we’re developing centers of excellence so that we can get access to those. We’re also looking at improved oversight, coming up with a very crisp way to make sure out oversight is effective and constructive,” he said.