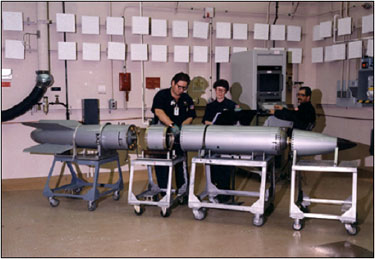 WASHINGTON, D.C. – The National Nuclear Security Administration (NNSA) today announced that it has accomplished 112 percent of its goal for planned stockpile dismantlements in FY 2012.

“NNSA delivered on President Obama’s commitment to reduce the numbers of U.S. nuclear weapons declared excess to the stockpile and awaiting dismantlement. We exceeded our dismantlement goals for FY 2012 by a significant margin,” said NNSA Deputy Administrator for Defense Programs Don Cook. “Our stockpile today is smaller, but the deterrent remains just as safe, secure and effective as it was. Dismantlements of legacy weapons are a key part of the Nuclear Posture Review, going hand-in-hand with the safety and security improvements in our Life Extension Programs and critical to our long-term national security.”

Taking apart nuclear weapons is a complex process that involves almost all of NNSA’s sites within the nuclear security enterprise.

NNSA’s design laboratories work with Pantex Plant to identify and mitigate hazards that may arise before a particular weapon type is dismantled.

NNSA’s national laboratories then apply the unique knowledge they gained during the original design process to each weapon in the stockpile.

The plutonium is placed in highly secure storage at Pantex. Non-nuclear components are sent to the Savannah River Site and the Kansas City Plant for final disposition.

The Y-12 National Security Complex receives uranium components, which are dismantled over a defined timeframe.

Dismantlement not only prevents the potential misuse of nuclear material, but also allows recycling of the material for national defense uses such as weapon refurbishment through the Life Extension Program and fuel for the Navy’s nuclear-powered fleet.

Some of the highly enriched uranium is also downblended to a less concentrated form for use in commercial nuclear reactors.