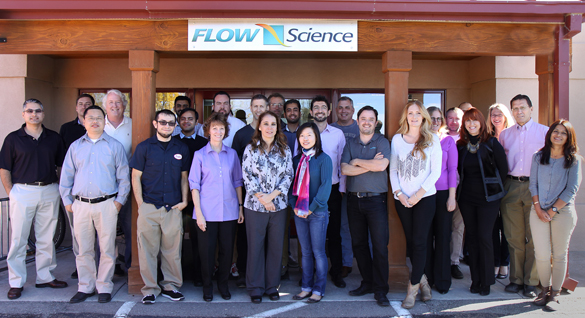 Flow Science of Santa Fe. Courtesy photo
VAF News:
ESPANOLA — The VAF awards are a collaborative investment with a shared goal of adding jobs and revenue to northern New Mexico, recognized by the International Economic Development Council (IEDC) with the 2014 Award of Excellence for Entrepreneurship.
Structured as a zero-interest loan with payback only required when a company meets certain revenue goals, is acquired or moves out of state, the VAF has just received its second payback from Flow Science, Inc. of Santa Fe. The first repayment occurred in 2014 from Titan Aerospace when the company was acquired, after the payback trigger was implemented in 2013.
“The funding my company received through the Venture Acceleration Fund program was instrumental in furthering our technology extension objectives and spurring further business growth,” Flow Science president Thomas Jensen said. “We are thankful to Los Alamos National Security and Kathy Keith, who manages the Community Commitment Plan’s economic development investments.”
In a letter to the Regional Development Corporation (RDC) that accompanied the $50,000 payback check, Jensen noted that Flow Science paid its award forward to “benefit other regional businesses that might be in a position to expand their research and development efforts via the VAF.”
Flow Science was not yet required to pay its award back, but chose to do so earlier than the timeline outlined in the award agreement. Jensen also noted his thanks to the Richard P. Feynman Center for Innovation at the Laboratory for technical assistance provided, and to Val Alonzo, business expansion and retention specialist at the RDC for his ongoing guidance and support to the company.
“This is an example of the amazing things that happen when we focus on relationships and provide the very best services possible to assist companies,” Liddie Martinez, executive director of the RDC said. “We are grateful that Flow Science sees the value of the VAF program and is eager to pay it forward to help other Northern New Mexico businesses.”
Headquartered in Santa Fe, Flow Science has been growing steadily and now employs 65 worldwide with 32 based locally. The company’s computational fluid dynamics (CFD) solutions allow commercial, academic, and government researchers all over the world to accurately model physical processes across a broad range of applications including water and environmental, coastal and maritime, metal casting, manufacturing, microfluidics, biotech, consumer products and energy. The company recently launched a new subsidiary, Flow Science Latin America SAS in Bogotá, Colombia, to support its suite of products throughout Latin America.
The VAF was established in 2006 by Los Alamos National Security, LLC (LANS), the company that manages Los Alamos National Laboratory, to stimulate the economy by supporting growth-oriented companies. Since then, the VAF program has assisted 61 New Mexico companies through marketing and technology development activities such as proof-of-concept, prototyping, developing market share, product launching or leveraging funding. In addition to LANS, other 2016 funders include the City of Santa Fe, Los Alamos County, New Mexico Manufacturing Extension Partnership, Santa Fe County, and Century Bank.
About the Venture Acceleration Fund (VAF)
The VAF is a collaborative investment established by Los Alamos National Security, LLC (LANS) in 2006. This year LANS, along with City of Santa Fe, Los Alamos County, New Mexico Manufacturing Extension Partnership (MEP), Santa Fe County and Century Bank are investing in the economic health of New Mexico via their support of growth-oriented companies. The fund is administered by the Regional Development Corporation of Española, New Mexico. Learn more at www.vafnm.org.
About the Regional Development Corporation
The Regional Development Corporation is a non-profit economic development organization based in Española, New Mexico with the mission of creating jobs and attracting additional revenue to the northern New Mexico region. Learn more at www.rdcnm.org.
Menu
Los Alamos
75°
Sunny
5:48am8:22pm MDT
Feels like: 75°F
Wind: 12mph S
Humidity: 28%
Pressure: 29.89"Hg
UV index: 8
SunMonTue
91/64°F
91/64°F
90/64°F
Weather forecast Los Alamos, New Mexico ▸