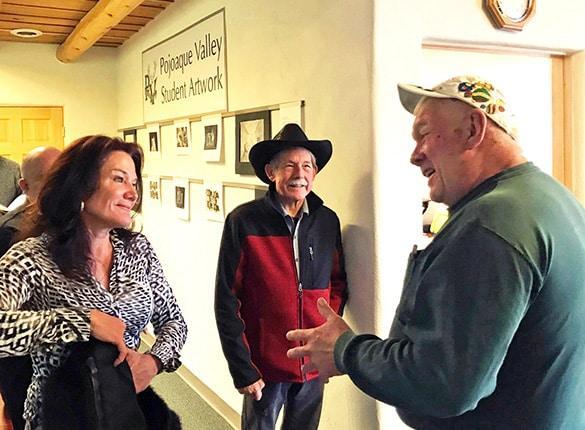 NNMP records indicate that the group “strives to lessen the stress of neighborhood tensions due to lack of information and fair representation”. Its officers are President Beverly Duran-Cash, Vice President David Neal, and Treasurer Gail Martinez. Heather Nordquist, Romero’s opponent for the Dist. 46 seat, resigned in June from her position as executive vice president of the group.

Duran-Cash told the Los Alamos Daily Post today that NNMP encourages people to stand up against corruption whenever and wherever taxpayer money is being spent for personal gain by anyone entrusted with their hard-earned money.

“It is not an easy position to challenge this corruption and people often are intimidated and fear retaliation. Andrea Romero attempted to retaliate against NNM Protects board members when our organization first questioned RCLC’s travel expenditures. Whistleblowers are said to be protected but this has proven to be just a facade with no real substance,” Duran-Cash said. “The Attorney General continues to investigate cases that are politically expedient and ignore cases that impact the taxpayer directly. Our organization has requested investigations into other areas of interest to New Mexicans and the response has been, ‘not important enough’. To who?”

Duran-Cash said the investigation should occur and then people will know the truth and remove assumptions.

“If lawmakers are going to make laws that help taxpayers stand up against corruption, then they should be willing to honor that challenge themselves and take these cases seriously instead of downplaying them,” she said.

NNMP also asked Balderas to investigate “other issues relating to transparency of the RCLC” saying they believe “many actions or decisions by the RCLC Board, including the executive director were never disclosed to the public”.

The NNMP letter to Balderas states that the group received information in November 2017 from one of its members indicating that there may have been some questionable reimbursements of travel expenses to RCLC board members.

“Further investigation at the time also revealed that Andrea Romero Consulting Inc., had a similar contract with the City of Santa Fe to provide similar services to the City to develop economic growth as part of bizMIX,” the letter states. “In reviewing the above information, it is without a doubt that violations of state and possibly federal laws were committed resulting in the misappropriation of public funds. There also exists the potential that some of these violations may have been intentional and there may have been attempts to cover up the violation(s) thereby suggesting there may have been some criminal intent.”

The letter also asks Balderas to investigate whether the RCLC Board and ARC complied with the New Mexico Open Meetings Act in conducting the business of the RCLC.

“Because one of the parties involved in this request is on the ballot for the general election in November, we ask that the (New Mexico Attorney General) complete this investigation in a very timely manner so that the voters may make an informed decision in voting during this election,” the letter concludes.

NNMP indicates that it requested records from the City of Santa Fe and Los Alamos County in December, and in February sent a letter to the RCLC Board expressing concern about “very many questionable and disconcerting expenses approved by the fiscal agent (Los Alamos County)”.

The three “audits” referred to by the group are a review by Los Alamos County of requests by ARC for reimbursement in early February, an audit performed by the Office of State Auditor Wayne Johnson released Aug. 7 and an investigative report conducted by the Adams + Crow law firm on behalf of the Los Alamos County Council.

Meanwhile, RCLC Chair Henry Roybal has placed an item on the agenda for the RCLC meeting,  scheduled for 1:30 p.m., Friday at the Espanola City Hall, asking for discussion and decision on obtaining legal services for the Coalition board. Roybal told the Los Alamos Daily Post that the board has discussed the need for legal services on and off for several years. He said attorneys for the individual RCLC entities are not legally allowed to represent the board.

“As RCLC chair, I believe the board needs to ensure going forward that all our policies and procedures fully follow the letter of the law. Also, as I have previously stated, I believe anyone who received inappropriate reimbursements should have to repay them, I believe the RCLC Board will need legal advice on this issue,” he said.

Also, on the agenda for Friday’s RCLC meeting is a briefing on the state audit by Los Alamos County Deputy Manager Steven Lynne.

Attorney General’s Office spokesperson David Carl confirmed Monday that the Office of the Attorney General has received a public referral and the matter is under review.