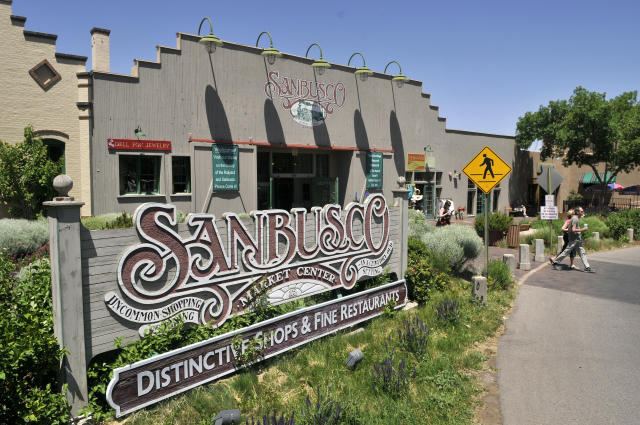 New home of the New Mexico School for the Arts. Courtesy photo

SANTA FE – At a special gathering at the New Mexico School for the Arts (NMSA) Wednesday, NMSA-Art Institute Director Riis Gonzales and NMSA Head of School Cindy Montoya announced to faculty and staff that NMSA is one step closer to acquiring a permanent campus.

The NMSA-Art Institute (NMSA’s non-profit partner), through its subsidiary Sanbusco 2015, purchased the Sanbusco Market retail complex Sept. 22. The statewide, public, arts-focused high school has been searching for a permanent home since its inception in 2010.

“We have a lot of work ahead of us, but we feel this location is perfect for New Mexico School for the Arts,” said David Ater, chair of the NMSA-Art Institute Board of Directors Building Committee.

Riis Gonzales, director of the Art Institute, emphasized NMSA’s intention of working closely with the current tenants of the retail complex to resolve lease and space issues, as the school, hopefully, phases in its occupancy over time.

“Santa Fe is a small community with many close relationships,” Ater said. “We aim to conduct ourselves in a way that reflects our goals, while respectfully building positive relationships with the current tenants and neighbors.”

NMSA opened in 2010 with 138 students from across New Mexico, and is a Title I school due to the number of students who qualify for free or low-cost meal programs. It now serves 215 teens from more than 37 New Mexico communities. Its plan is to grow to serve up to 300-400 students, something it is unable to do so currently because of space limitations.

Each year, NMSA has turned away an increasing number of applicants, who are drawn not only by the school’s dual curricula of mastery arts training in music, dance, theater, and visual arts and rigorous academics, but by the stellar track record NMSA has established in just five years: NMSA was recently named the 10th best high school in New Mexico by US News & World Report, which also in 2015 moved the school up from a Bronze to a Silver rank in its national assessment.

The NMSA senior class of 2015 had a graduation rate of 100 percent and received $5.5 million in scholarships and financial assistance offers from post-secondary institutions like the School of the Art Institute of Chicago, New York University-Tisch School of the Arts, the Berklee College of Music in Boston, Penn State, Rhode Island School of Design, and California Institute of the Arts.

An Albuquerque-based student who takes the Railrunner to Santa Fe every day and then has to take a local bus to NMSA’s current leased location, said, “Having the school steps away from the Railrunner will be fantastic – this will make my commute so much easier and save so much time in my school day!”

“The site is perfect for an arts-focused school, and will enhance our community’s identity as a place deeply committed to the arts and creativity – not just to residents, but to the many visitors the Railyard and downtown area welcome each year,” said NMSA-Art Institute Board member Tom Aageson, long active in Santa Fe’s cultural life. “I’m sure that the proximity of NMSA students, parents, faculty, and staff to our Railyard neighbors will also make a significant contribution to their businesses.”

When asked about the potential new site, Mayor Javier Gonzales said, “I made a commitment shortly after taking office to help the school any way I could to find a permanent home. Now that it has come closer to doing so, I will keep that commitment, and our city will assist NMSA in every way possible.

“New Mexico School for the Arts is an educational and economic success story, the students are thriving both academically and artistically, and the NMSA-Art Institute is pouring millions of dollars into Santa Fe’s creative economy. Santa Fe is known throughout the world as a top destination for art; our City, our State, and these young New Mexican artists deserve a creative environment to hone their skills and a stable home in order to thrive.”

NMSA Visual Arts Chair Cristina Gonzalez focused on the immediacy that the area’s thriving art scene would add to the arts education provided at NMSA.

“The downtown Railyard location, with its galleries, museums, and cinemas, will bring home to our students where their classroom training can lead, what it means to choose a life in the arts, and will allow them to observe and absorb the work of professional artists on a daily basis, simply by stepping outside NMSA’s doors and looking around,” she said.