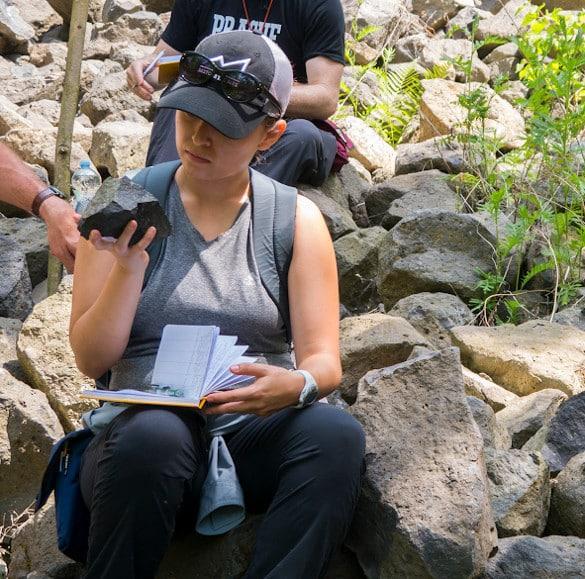 Highlands geology graduate student Sindy Lauricella examines a rock sample from the Krasny Vrch volcano in the Czech Republic during field research. Photo by Jake Erickson/Highlands Media Arts
NMHU News:
LAS VEGAS, NM ― Highlands University geology students conducted five weeks of groundbreaking research aimed at understanding the legendary Krasny Vrch volcano in the Czech Republic.
Highlands University’s three-year $250,000 National Science Foundation Grant, titled From the Roots to the Roof: the Anatomy of Volcanoes, funded three geology students to conduct research in the summer of 2018. The grant also funded two media arts and technology students to make a documentary of the research process.
“The volcanic research is important because understanding the ancient volcanoes can help predict eruptive behavior of active volcanoes worldwide,” said Highlands geology professor Michael Petronis, who led the Highlands research team.
Petronis and Jennifer Lindline, also a Highlands geology professor, wrote the NSF grant and are its lead researchers. The research partnership includes scientists from Charles University in Prague, Czech Geological Survey, and Czech Academy of Sciences.
“Our Highlands field research is the first to study the Krasny Vrch quarried volcano in the Northwest Czech Republic. We used a variety of field techniques including geophysics to map many types of volcanic deposits within the crater. We’ll use new seismic and magnetic data to image the subsurface of the 17.2-million year-old-volcano,” Petronis said.
The Highlands students who participated in the research include geology graduate students Sindy Lauricella and Richard Pratt, along with media arts graduate students Terence García and Jake Erickson. Jacob Helesic from Sul Ross State University also participated.
“I’ve always been fascinated with volcanos and how they work,” said Lauricella, a 23-year-old from Taos, New Mexico. “Doing this field research in the Czech Republic with my adviser, Dr. Petronis, was a dream come true. This research opportunity was life changing because it made me feel like I’d become a scientist. This is very special to me because I’m of Mexican-American heritage and the first in my family to receive a college degree.”
Lauricella’s Krasny Vrch volcano research is the basis of her master’s thesis.
“For my thesis, I’m studying the magma emplacement, how it moved, and subvolcanic deformation associated with the growth of the volcano,” Lauricella said. “I’ll be analyzing rock samples we brought back from the Czech Republic in our Paleomagnetic – Rock Magnetic Lab at Highlands. This research will help identify the growth of how the volcano formed.”
García and Erickson collaborated to produce an 18-minute documentary film of the Highlands geology fieldwork that will be featured on the National Science Foundation website.
“Immersing ourselves in the geologic details before the fieldwork in the Czech Republic helped us be prepared to present the Highlands research in an understandable and dynamic way,” said Erickson, a 27-year-old Las Vegas, NM native. “I think my past interviewing skills in media arts made it possible to delve deeply into the subject.”
The documentary is nearly complete and can be viewed here.
“One of the most exciting things for me was the opportunity to experience a different country and its culture while using my filmmaking skills in a fast-paced fieldwork environment. I am exceedingly grateful that Highlands gave me the opportunity for this fantastic once-in-a-lifetime learning adventure that builds my portfolio,” Erickson said.
In addition, Erickson and García produced other videos that will be translated and used in Czech Republic museums and displayed at the 100-year anniversary of the Czech Geological Survey in Prague.
“This NSF grant helped build our students global competency and immersed them in Central European culture,” Lindline said.
Over the years, Petronis and Lindline have secured National Science Foundation and other grants to take 15 students to Europe for geologic research.
“Dr. Lindline and Dr. Petronis inspire me with their intelligence and knowledge,” Lauricella said. “They always believed in me and pushed me to become successful in my studies.”
LOS ALAMOS