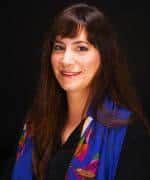 Sarah Corey-Rivas
NMHU News:
LAS VEGAS, NM ― New Mexico Highlands University has named biology professor Sarah Corey-Rivas Professor of the Year for the 2018 – 2019 academic year.Each spring an independent selection committee composed of students, faculty and staff reviews the nominations for Professor of the Year and selects a winner.
Corey-Rivas said she is touched that her students nominated her for Professor of the Year. “This award helps me know that the respect and admiration I feel for my students is mutual.”
Megan Thursby, a 2018 Highlands biology graduate who was accepted to a Ph.D. program at the University of New Mexico in biomedical sciences, was one of the students who nominated Corey-Rivas for the award.
“I was not only inspired by Dr. Corey-Rivas’ brilliant intelligence and creativity but moved as a woman in science to believe in my abilities as a contributor to society,” Thursby wrote in her nomination letter. “When someone is enrolled in a class with Dr. Corey-Rivas, he or she can expect to catch her infectious desire to embrace knowledge.”
Estrella Gutierrez, another 2018 Highlands biology graduate, also nominated Corey-Rivas for the award.
“Dr. Corey-Rivas is an empowering and compelling individual who strives for the success of her students,” Gutierrez wrote. “She has helped undergraduate students by hiring local students who never knew they had the capability to become successful in research, as I have. As Lailah Gifty Akita said, ‘Every great achiever is inspired by a great mentor.’ Dr. Corey-Rivas is inspiring a new age of innovators.”
Blanca Cespedes, a forestry professor at Highlands, also nominated Corey-Rivas for Professor of the Year.
“Dr. Corey-Rivas’ teaching capacities are very strong, creative and admirable,” Cespedes wrote. “She is a brilliant stimulus for students. Dr. Corey-Rivas stresses the importance of maintaining creativity and imagination in science.”
Corey-Rivas earned her Ph.D. in evolution and ecology from Ohio State University in 2009, and in 2010 joined the faculty of Highlands, where she established a molecular ecology laboratory.
At Highlands, Corey-Rivas teaches classes in advanced ecology, macroevolution, molecular ecology and general biology 1. She said research is an important component of all her classes. “Research is how students develop critical thinking through problem solving. It’s also exciting, fun and creative because it’s on the edge of mysteries we don’t know.”
Corey-Rivas said her primary research focus is conservation genetics and disease management. Her research has been published in scholarly publications such as Molecular Ecology, Diversity and Distributions, and Herpetological Review. Other species of concern in Corey-Rivas’ research include bison, leopard frogs and garter snakes.
Corey-Rivas has garnered a number of research grants for Highlands, including a $439,500 grant through New Mexico INBRE, Idea Networks of Biomedical Research Excellence, a National Institutes of Health program.
“For the past five years, with INBRE research funds, I’ve focused primarily upon a genome-level study of the threatened boreal toad, which means examining a collection of all its genes,” said Corey-Rivas. This toad’s immune system’s response to deadly pathogens is the main reason for its serious decline in the Rocky Mountains. More than 10 Highlands students have worked with me on this research.”
Corey-Rivas said she uses creative independent projects to encourage students to develop critical thinking skills.
“The key is to let students struggle in a structured, supportive environment where they develop the mental muscles to persevere in science,” Corey-Rivas said. “All of this academic preparation allows students to go into a professional job or graduate school and have confidence they can solve complex real-world science problems.”
Corey-Rivas said the most exciting thing about teaching is to see students find their own identity as scientists and succeed.
“The Highlands students’ capacity for academic progress and achievement is incredible to see and pushes me to work just as hard. I firmly see myself as a facilitator of learning, meaning I get to help students figure out the kind of scientist they want to be.”
Menu
Los Alamos
72°
Mostly Cloudy
5:48am8:24pm MDT
Feels like: 72°F
Wind: 17mph NNW
Humidity: 27%
Pressure: 29.77"Hg
UV index: 0
SatSunMon
86/63°F
90/64°F
84/59°F
Weather forecast Los Alamos, New Mexico ▸