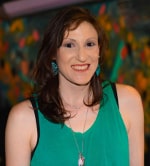 Dré Gallegos
NMHU News:
LAS VEGAS, NM ― A Highlands University media arts and technology graduate is playing a key role in building new exhibits for Meow Wolf, a highly successful Santa Fe immersive and interactive art installation that is expanding to two new cities.
Dré Gallegos is the lead technical fabricator for Meow Wolf’s team of eight employees dedicated to installing the technical artwork components for the new Denver and Las Vegas, Nevada, installations estimated to open by 2020.
“Dré has an unwavering attention to details and total commitment to seeing projects through to maximum artistic potential,” said Conor Peterson, a general manager of technology at Meow Wolf. “She has grown rapidly with the company. Her teammates look up to her work ethic and technical acumen. Dré’s skill set with building electronics is rare these days. The media arts program at Highlands, which is ahead of its time, made her uniquely qualified. She was a must-have for the Meow Wolf team.”
Peterson said when Meow Wolf makes technically infused art it requires inventing electrical assemblies that can’t be purchased.
“We need someone like Dré to build the inventions for our artwork. For instance, she built a wall of hundreds of light-up buttons that worked with a computer music synthesizer we installed at the Oregon Eclipse Festival in 2017,” Peterson said.
Peterson said as the lead technical fabricator, Gallegos is in charge of planning the wiring and all the electronic artwork for the new Denver and Las Vegas installations.
“For example, if a visitor pushes a button in an exhibit, the microcontroller, which acts like a computer, senses that the button is pushed and turns on a series of lights,” Gallegos said. “This is a simple form of interactivity within an exhibit at Meow Wolf, but the  majority of our exhibits are much more complex with a variety of sensors and electronic outputs that control light, sound and motion.”
Gallegos, a 31-year-old Las Vegas, New Mexico, native, has worked at Meow Wolf since July 2017 as a technical fabricator before being promoted to lead technical fabricator in December 2017. She earned her master’s in media arts with an emphasis in physical computing in 2017 and a BFA in 2014 with an emphasis in visual communication.
Gallegos said what makes Meow Wolf magical for the public is having the art, design and technical components work together.
“The tech fabricators are extraordinary awe-inspiring people, and I am lucky to have such an outstanding team,” Gallegos said.
Meow Wolf opened in March 2016 with the vision of creating immersive and interactive experiences aimed at transporting audiences of all ages into fantastic realms of story and exploration in its 20,000-square-foot space. The company is composed of approximately 200 artists from different disciplines.
In its first year, Meow Wolf shattered its break-even goal of 150,000 guests by reaching 400,000 from around the world.
The 2016 Meow Wolf launch showcased the award-winning House of Eternal Return permanent exhibit. Meow Wolf said in this exhibit, “guests discover a multidimension mystery house with secret passages, portals to magic worlds, climbing apparatus, and surreal and mesmerizing art exhibits along with a children’s learning center.”
Meow Wolf, which has gained international media attention, was described by PBS in a February 2018 documentary as, “a mystery funhouse and the next big thing in immersive entertainment.”
“Meow Wolf is an incredible work environment filled with like-minded people. We all love what we do creating and building beautiful interactive exhibits and environments for the public,” Gallegos said.
She said her Highlands master’s degree gave her a solid foundation for the work she does at Meow Wolf.
“Miriam Langer, a media arts professor who was also my mentor and graduate adviser, is an inspirational woman who can do anything related to physical computing. She taught me how to create interactive exhibits. Working with Miriam transformed my life because from the first physical computing class with her, I knew I wanted to work with this exciting technology. I’m very grateful for my entire media arts education at Highlands,” Gallegos said.
Langer, who chairs the Media Arts and Technology Department at Highlands, said she is not surprised by Gallegos’ success at Meow Wolf given her outstanding track record at the university.
“Dré is an exceptional person and was a simply stellar media arts student,” Langer said. “She has the unique ability to see the big picture of a complex project while also solving intricate technical issues that come up along the way. She’s was absolutely driven at Highlands to make sure anything she created met the highest standards of design and function. She’s very smart, capable and an all-around excellent role model for our Highlands’ students.”
Menu
Los Alamos
46°
Fair
6:54am4:52pm MST
Feels like: 46°F
Wind: 0mph ENE
Humidity: 34%
Pressure: 30.44"Hg
UV index: 2
MonTueWed
57/36°F
59/34°F
59/36°F
Weather forecast Los Alamos, New Mexico ▸